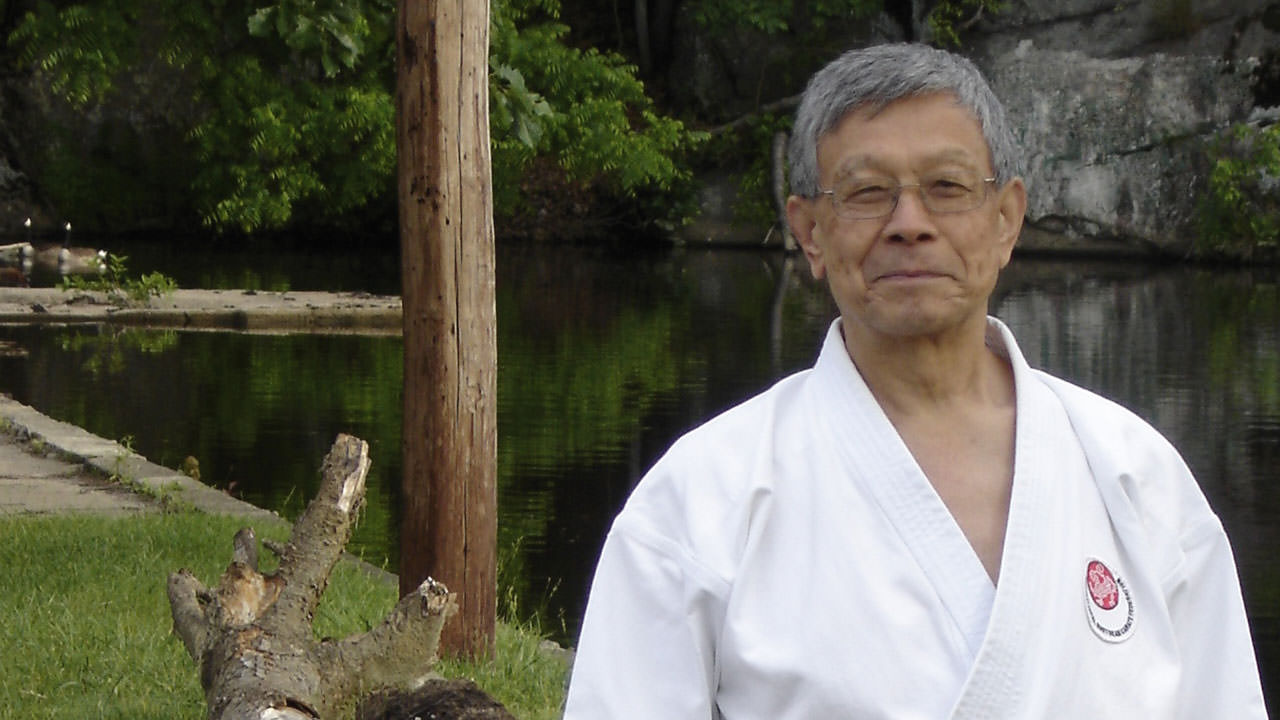 We are highly honoured to feature an exclusive interview with Master Teruyuki Okazaki 9th Dan, the Chief Instructor to the ISKF (International Shotokan Karate Federation) who has been based in the USA since 1961. Thank you to British karateka and author, Rod Butler for kindly conducting the interview for SKM. Okazaki sensei was a founding member of the JKA and along with Hidetaka Nishiyama sensei was the first to develop the infamous JKA Instructors Course Programme in Japan in the late 1950's. They were the ëteachers of the teachers' and taught such greats as, Kanazawa, Enoeda, Shirai, Asai, Mikami etc etc. Okazaki sensei still trains and teaches at his dojo in Philadelphia as well as travelling all over the world to pass on his wealth of knowledge and experience.

The notorious Full-Time professional Instructor's courses which have gone on in Japan since the late 1950's have always been a source of great interest to SKM readers and Shotokan karateka in general, simply because it's quite hard to imagine the sheer difficulty and severity (some say abject cruelty) suffered by these karateka! And the ëtotal' dedication required by the people who have endured these rigorous regimes both in the past and still continuing in Japan to this day within such organisations as the JKA, SKIF and JKS etc. We have previously featured many Shotokan karateka who have endured these special programmes and I make no excuse for featuring even more in this edition of the magazine. Takashi Yamaguchi and Pemba Tamang both embarked on this most fearful of karate journeys and lived to tell the tale. It takes a very special person and a strong, determined character to get through this ordeal and we have much to learn from such people.

Dr Tim Hanlon's article may appear very 'heavy' at first sight, and I did even consider not using this article, but we must remember that 'kime' and 'use of the hips', 'tanden', 'hara' and using the body's 'core-centre' have taken on almost mythical proportions in Traditional karate over the years, with virtually 'no' explanation of what is actually physically going on in this area of one's body. This article explains in depth the significance and importance of the body's 'core' and its vital relationship with the mysterious 'kime'; it needs a careful read

A 'Letter to the Editor' in the last issue sparked a great deal of interest and many people wrote in saying what they thought about these ideas. e.g. We are constantly advised/told to 'relax' before delivering techniques and even more so, in between techniques etc. However, when you are extremely nervous, one naturally tenses-up! That's a fact! So, the 'letter' writer picked up on a very interesting point.

Also, the question asked in Matt Price's fine article, "Jiyu Kumite - Is it Necessary?" brought a great deal of debate and interest from many readers with equally opposing views as can be seen in this issue's 'Letters' pages.

'MAWATE' It's More Than Just a Turn! By John Cheetham.

Most of us (Shotokan karateka) will have done this simple movement a million times over the years whilst doing basic training up and down the dojo. On the command, ìmawateî we take our back foot across either to the left or right and twist the hips and body around to face in the direction we have just come from. We have quite simply 'turned' (mawate) and usually (in Shotokan dojo's) we turn with gedan barai (downward block). Not much attention is paid to this movement other than 'speed', 'a serious aware attitude' (zanshin) and focus (kime). And some clubs (dojo) emphasise turning on the heel, others don't pay much heed to this technicality, which is a debatable point anyway (?) Other than that, the 'mawate' turn is just a method of getting us to face the other way and proceed with whatever we are working on etc.

Now, this simple, (often overlooked) movement is in fact a 'gem' and unique to karate and is a 'technique' in itself. Here is a true story from a karate friend of mine who discovered the massive importance and usefulness of this movement by sheer chance and necessity! Not too long ago he was attacked on a car park when returning to his car. He'd been shopping and was approaching the car when he spotted a man trying to break-in, (the guy had actually just got the door open). He dropped the shopping and ran as fast as he could and slammed the guy into the car head first, but a split second later, he heard another guy charging in from behind him, (he was screaming obscenities) my friend said that the distance was about four feet when he 'turned' (mawate) in our time honoured fashion, as a complete natural, muscle- memory action, which he'd practiced without thought for years and bloody years, and shot out a mae geri (front snap kick) that landed right in the guy's gut. I can tell you from experience, that my friend has a hell of a mae geri!! It doubled the man up, he was completely out of it.

Fortunately a Police patrol car was on the scene very quickly, it was Xmas and there had been a spate of car-jacking on this particular shopping mall car park and these two characters were known to them. I can't go into the exact legal aspects of this occurrence but I can tell you this, our karate friend was told by a police officer that it looked like he'd used unreasonable force! He was lectured about 'over-reacting' (that's what they actually said) but he was free to go at that time, but it didn't end there and later that day he was arrested?and charged with (?) The two guys were both on the floor and in a bit of distress when the police arrived. The one he'd slammed into the car had to have ten stitches in his forehead and the other guy had to be checked-out for internal injuries. It turned out he'd only been very badly winded. What a shame eh! Anyway, thankfully after a lot of explaining and witness statements confirming that the guy who charged him from behind was (actually) wielding a baseball bat; the self-defence aspect for that part of the incident was agreed upon. It was a quite lengthy complicated court case. In court the lawyer for the two 'yobs' made it sound like 'they' were the 'victims' of a violent attack by a deranged karate 'expert'! And 'NO' I'm not joking either!! I feel that the law on self-protection is an Ass!

Sorry that I digressed, however, the point is that our karate friend saved his bacon (or rather saved having his head smashed in by a baseball bat) by using a simple movement which we all do time and time again, over and over without a second thought, 'mawate'.

Our basic turn, 'mawate' is a very clever, organised, underrated action. If you observe a non-karate person try to turn really quickly (as if attacked from behind) they rarely move their legs, it's usually just a fast head and upper body turn, and a very awkward movement.

Try this training drill using mae geri, after turning. Look at the photo sequence where one turns, as normal, but fires off a mae geri into a pad. This is a fantastically powerful action, mainly because of the momentum involved, especially if you get the timing and technique bang-on! The knack is to take the back foot across as in a normal turn (mawate) (photo 2a) but as soon as the back foot becomes the front foot, make sure that your right (kicking) leg is ready to deliver the kick. Also, don't turn and make a forward stance, and 'then' kick, you must turn and have the kicking leg already in the mae geri firing position, (see photo example 3a opposite) otherwise it's too slow; it should be just 'one' fast, smooth action - and get your hips into the kick.

Another useful application of a basic mawate, often used in kata, although slightly different from the previous example, can be seen in the self-defence sequence demonstrated by the late, great Keinosuke Enoeda sensei.... but you will have to buy the mag to see this.