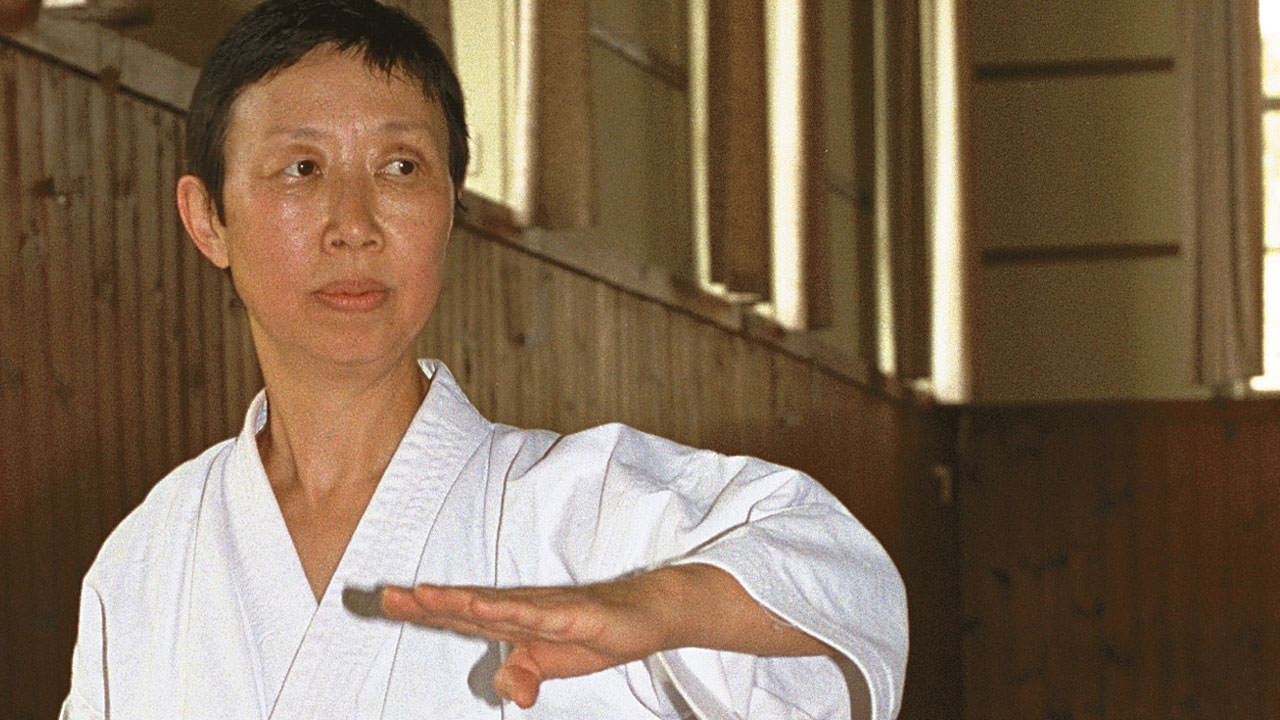 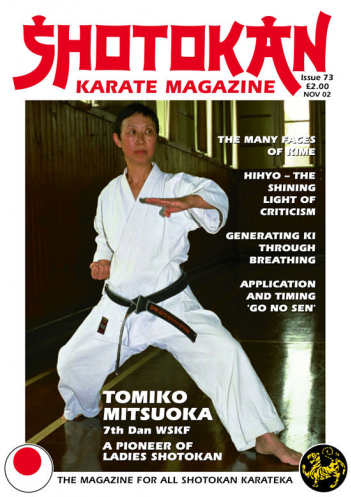 TOMIKO MITSUOKA 7th Dan. A Pioneer of ladies, Shotokan. Letters to the Editor. THE MANY FACES OF KIME. By Dr Timothy Hanlon. A BAD DAY AT THE DOJO. By John Cheetham. HIHYO THE SHINING LIGHT OF CRITICISM. By Mike Clarke. THE EMPEROR'S GOT NO CLOTHES. By Dave Hooper. APPLICATION AND TIMING GO NO SEN. By Avi Rokah. GENERATING KI THROUGH BREATHING. By Aaron Hoopes.

I thought it was about time we featured another lady karateka in the magazine (the last one being the former KUGB ladies kata and kumite champion, Julie Nicholson in issue 66) and who better than someone who was a genuine pioneer in Japan for ladies practicing Shotokan in the early 1960's. Tomiko Mitsuoka 7th Dan has an enviable pedigree in karate as you will see and is still very active practicing, and teaching after almost forty years of karate training. She was a long time student of Master Hirokazu Kanazawa (SKIF) and later joined Hitoshi Kasuya sensei, head of WSKF. A resident of the United Kingdom since 1994, Tomiko Mitsuoka comes from a very formal traditional lineage and has some interesting points to make in this exclusive interview for SKM.

Dave Hooper has written some great articles for SKM over the years but this time I think the 'epic' in this edition is one of the very best from the sometimes controversial Dr Hooper. (If you didn't know, Dave is not only an excellent karateka, inspirational instructor and communicator, but also a Ph.D. who lectures at Waseda university in Tokyo). There's never been any question that Dave Hooper is totally biased in favour of JKA Shotokan, which is obvious from all his previous articles. This time he really explains in considerable depth what actually characterises JKA Shotokan karate-do. It's a lengthy piece (Dave's usually are!) but a fascinating read!

Avi Rokah's article is highly technical as usual and needs very careful study. The subject is about 'timing' in kumite and in this edition the concept focuses on go-no-sen. There's much to be learned from this, so if you don't understand it, then read it again, over and over if you must. Of course this type of subject ideally has to be physically taught, but Avi explains all the necessary principles. Remember that these are the ideas and theories of Avi's teacher, Nishiyama sensei, who Avi Rokah trains with daily in Los Angeles. When practicing go-no-sen, (the block and counter concept) many students first block the attack and then there's a 'time gap', a 'space', before their counter-attack. Avi explains how to minimise this gap/space. You could argue that a simultaneous block/counter is best, but in reality who can 'really' do that? Not many!

Dr. Tim Hanlon comes up with some extremely interesting ideas on the often discussed subject of 'kime', which means various things to different people, ranging from, being 'the' most important aspect of traditional karate to being total nonsense! In fact the 'kime' talked about in Shotokan karate is usually attributed to the basic ideology of the late former Chief instructor of the JKA, Master Masatoshi Nakayama. Tim Hanlon's idea about different lengths of 'time' for kime is quite intriguing and unusual but makes a lot of sense, it's a controversial subject without doubt and many people have their own opinions on what constitutes kime, if in fact such a thing exists? Athletes call it 'the zone'.

Mike Clarke has been described as SKM's 'philosophical' writer, someone who always focuses on the 'do' of the art. I feel that's a very just description, and once again Mike doesn't change his style in his latest 'Hihyo' of the martial arts.