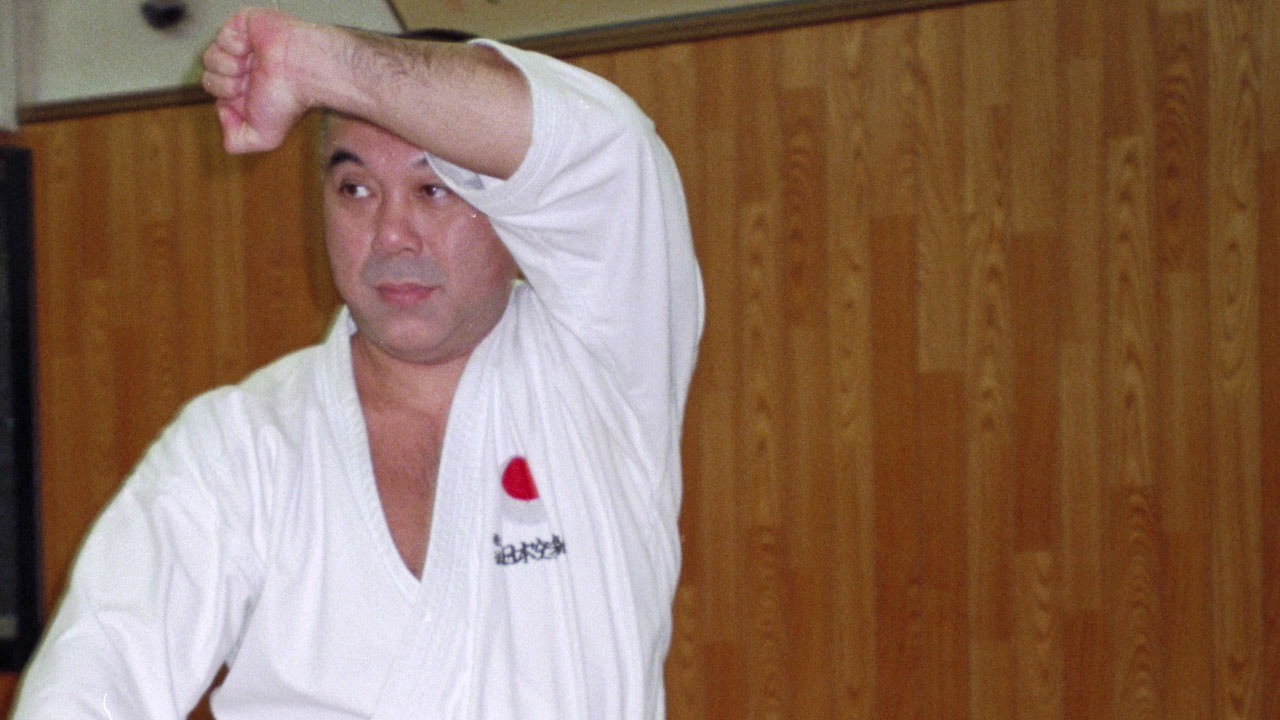 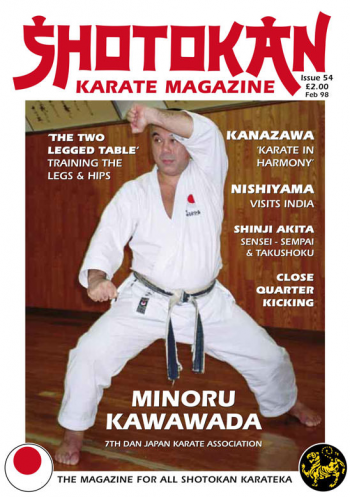 Here we are again, February already and the first issue of SKM for 1998.

I am particularly pleased about the interview in this issue which features another marvellous Shotokan instructor, namely Sensei Minoru Kawawada 7th dan JKA who is currently the Chief Instructor at the Hoitsugan dojo in Tokyo. He is also an instructor at the JKA Honbu. The Hoitsugan is the former home and dojo of the late JKA Chief Instructor, Master Masatoshi Nakayama. It says a great deal for Kawawada sensei's standing and ability that he was chosen by Nakayama sensei for such a position. Sensei Kawawada is a former JKA All Japan kata champion, he also placed 3rd in kumite in those same championships. He also won first place in both kumite and kata in the prestigious JKA Shoto Cup. This interview along with Leon Montoya's article were done exclusively for SKM with the kind assistance of British (London) karateka, Ken Wight 2nd Dan who recently lived and trained in Japan for six months, training at both the Hoitsugan and the JKA Honbu dojo (Sugiura faction).

I was sent some good information from various sources regarding my article (in the last issue) 'Shotokan Has Not Changed'...namely that the date of the old movie film (with Funakoshi demonstrating kata) was more like 1932 and not 1924. It appears that Gichin Funakoshi was in the process of developing his own karate style and system (Shotokan) between these dates and arrived at stances which we use in Shotokan today, by around 1930. So, yes! He did use deep stances, which were then used and taught by his senior students, (Nakayama, Nishiyama, Oshima etc.). When he first went over to Japan from Okinawa in 1922 he was using high - short stances (Okinawan style). He was in the process of developing Shotokan after this period. So, basic Shotokan stances have not fundamentally changed from when this development was complete, by around 1930. This was the 'whole point' of the article because so many times we have heard that Funakoshi only used short, high stances, when in fact he most certainly did not! That was the main point I was trying to get across in the article.

By far the most complimentary comments about the content of the magazine, are in regard to the 'Technical' information which we have supplied over the last thirteen years. For people who like these technical articles, 'The Two Legged Table' in this issue by Leon Montoya 3rd Dan JKA, explains one of the most important, yet fundamental developments that the JKA made regarding 'Body Movement'. I think Leon's article needs very, very careful study by beginners 'and' advanced students. Leon teaches at the Hoitsugan dojo and he states that the biggest problem for experienced foreign karateka, is how to 'un-learn' and how to re-learn by having a beginner's mind. Leon feels that this point regarding the 'table effect' of the hips is a very important key to unlock the door to smooth, fluid, yet powerful movement that all the JKA sensei's past and present exhibit. Leon Montoya has also done an interview with Ken Wight which will hopefully be in a future issue.

The Positive Side of Traditional Karate Competition By John Cheetham.

Although we don't feature competitions and tournaments too often in SKM, I do feel that traditional competition events are very important for the future of Shotokan Karate. Not only the 'closed', 'in house' association events, because these can quite often limit a student's progress, they sometimes get blinkers on and mistakenly think that the only good Shotokan is within their own association, which is total rubbish as we all know. As well as the usual yearly or regional association championships, 'Open' or 'International' tournaments are vital to the future of Traditional Shotokan Karate.

You need to see such events to appreciate what is going on in the world of Shotokan (in terms of technical standards) and remember that even if some countries or even some associations from within those countries are not of a particularly high standard at the time, they will be inspired to work harder at their technical (and spiritual) standards when they see others who are technically superior and who hopefully behave with the proper karate etiquette and demonstrate correct sportsmanship and manners. This is an important point which hopefully separates traditional competition events from 'sport karate' tournaments. Many, (if not all) senior instructors say that one very positive thing about competition, is that it makes people train harder. If you have ever competed yourself you will know that you certainly 'up' your training, both for your own personal satisfaction and pride as well as for your club-team or whoever you are representing. A quite interesting point is emerging and that is that Shotokan clubs with the largest memberships are generally clubs who quite regularly compete and enter tournaments. Juniors and teenagers are no longer flocking to traditional styles like Shotokan anymore, they want a 'quick fix' and maybe a 'flashy' outfit, (kick boxing, taekwando, etc). So, competition is possibly the only way forward for the future of traditional Shotokan, like it or lump it! Many people will not like it, but they should ponder on the more positive aspects, for instance, Kawawada sensei mentions the positive side in his interview. In defending traditional competition karate, I must say that so many times you hear or read that competition is 'not real' - 'sport only' - 'useless' and 'not effective' etc, etc. Well, the more I think about it and have seen it over the years and the more I totally disagree. I'm talking about proper Traditional Karate competition, not the watered down, 'tick you've got a point' sport variety! When two good, strong experienced traditional karate fighters face each other, if things go wrong and an accident occurs through over enthusiasm or one fighter does not exercise the proper control, (which should not happen) then you can guarantee that 100% of the time someone will get 'flattened'. So, if karate competition is so weak and in-effective, then how come so many people get knocked-out? The answer is simply because it's so fast, dynamic and obviously is 'effective', that's why! These people who sit on the sidelines and criticise competition, should get up there and see how weak and useless it really is. I now understand why Master Nakayama and Nishiyama pioneered competition as a part (albeit a very small part) of modern karate, because in a nutshell it is the nearest most people will ever get to a real confrontation. The very same tactics and strategies which apply to traditional competition can also apply to a real confrontation, although obviously the distance from the opponent will vary. And certainly, and very importantly, one's emotional state is tested to the full. This aspect is probably the most important factor, the testing of your spirit under pressure and the possible fear and risk of injury etc. Master Hidetaka Nishiyama who was at the forefront with the development of traditional karate competition during the early and mid-1950's explained the difference between Traditional Karate competition and Sport Karate competition perfectly in his opening address from his book, 'The I.T.K.F. Coach's Manual' (International Traditional Karate Federation). He said.....

The other new (sport) Karate had its developmental origins in the Traditional Karate from Japan. The new (sport) karate derived their techniques and orientations from the punching and kicking basis of traditional karate. While appearing to be similar, the new sport karate made some crucial modifications. Perhaps the most critical was the change in emphasis and philosophy from a self-defence martial art to a multiple point scoring game that used punching and kicking. For example, it is generally known that sport karate incorporates kicking and punching action in the broadest and most general sense. The points awarded in sport competitions are based on the quickest and closest hands and feet to the target. In such a situation, the 'finishing blow' is not a requirement. As a result, the applications of impact force through total body action is not necessary. Moreover, a priority is placed on economy of body action. In this most important regard, the Traditional Karate body dynamics are completely opposite from those of the new (sport) karate.

Because sport karate has no requirements for a finishing blow, their competition rules are based instead on multiple point systems. Traditional Karate is based on the art of self-defence. Because opponent size is consequently irrelevant, there is no weight category. On the other hand, sport karate base their outlook on the concept of a game and not the martial arts.

Many people I have spoken to find it incredibly hard to swallow that pre-1920's karateka were even in the same league as people who trained and developed their karate at the Japan Karate Association (JKA) and became the first 'Traditional Karate' competitors and champions, like senseis Kanazawa, Enoeda, Asai, Shirai, Mikami etc., etc. Let alone the later generations of karate competitors, Yahara, Osaka, Tanaka, or later Frank Brennan, Ronnie Christopher (Europe) or Kagawa, Omura, (Japan) etc. It's like saying pre-war athletes were superior to modern day sportsmen! They were nowhere near today's athletes in terms of either skill, technique, speed or power, and that is an absolute fact!

Traditional karate competitors (athletes) should still have at their base roots the 'finishing blow' concept and the art of self-defence as the major, governing factor. Perhaps this point has been overlooked recently and needs to be re-established and re-affirmed within all traditional Shotokan organisations to make students aware of the benefits and importance of (even if only occasionally) competing and testing their skills and spirit in such events.

I think after reading Nishiyama sensei's words, many students will now perhaps understand the fundamental difference between what we (Shotokan) are trying to achieve through competition karate and what others are aiming for through 'sport'. There is a massive difference in both concept and philosophy as you can see.

KATA in competition also demands total concentration and spirit from competitors, equally as much as kumite. Kata is equally important. The positive benefits of kata practice are unquestionable. If a sensei wanted to see the overall karate ability of a student, they would simply ask them to perform a kata. Everything is there to see; spirit, power, form, body dynamics, fluidity and transmission of movement etc. All the elements needed for a complete karateka. Make no mistake, if a Master was going to give a demonstration of kata at a tournament, they would also practice their kata more before the event. This is natural. Kata competitors study their kata in great detail, going over and over the finer points and usually their kata training will be far more intense than the average student. This has to be a 'positive' aspect. The more you train, the more you improve.

Nearly all the great kata competitors we have seen over the years have also been equally good at kumite, there have been many 'Grand Champions' - Kanazawa, Mikami, Osaka, Kagawa etc., unlike 'sport' karate where you have 'fighters' and 'kata' people, as two separate entities. The 'positive side' to Traditional Karate competition can, if approached correctly, outweigh the negative aspects as long as instructors make it very clear to their students that competition is only a very small part of karate and not karate itself. So, this magazine makes no apology for supporting 'Traditional Karate' competitions and tournaments organised by the various Shotokan associations throughout the world. Let's keep the standards high and ever improving and maintain and keep intact the traditional philosophy and spirit of Karate-do.