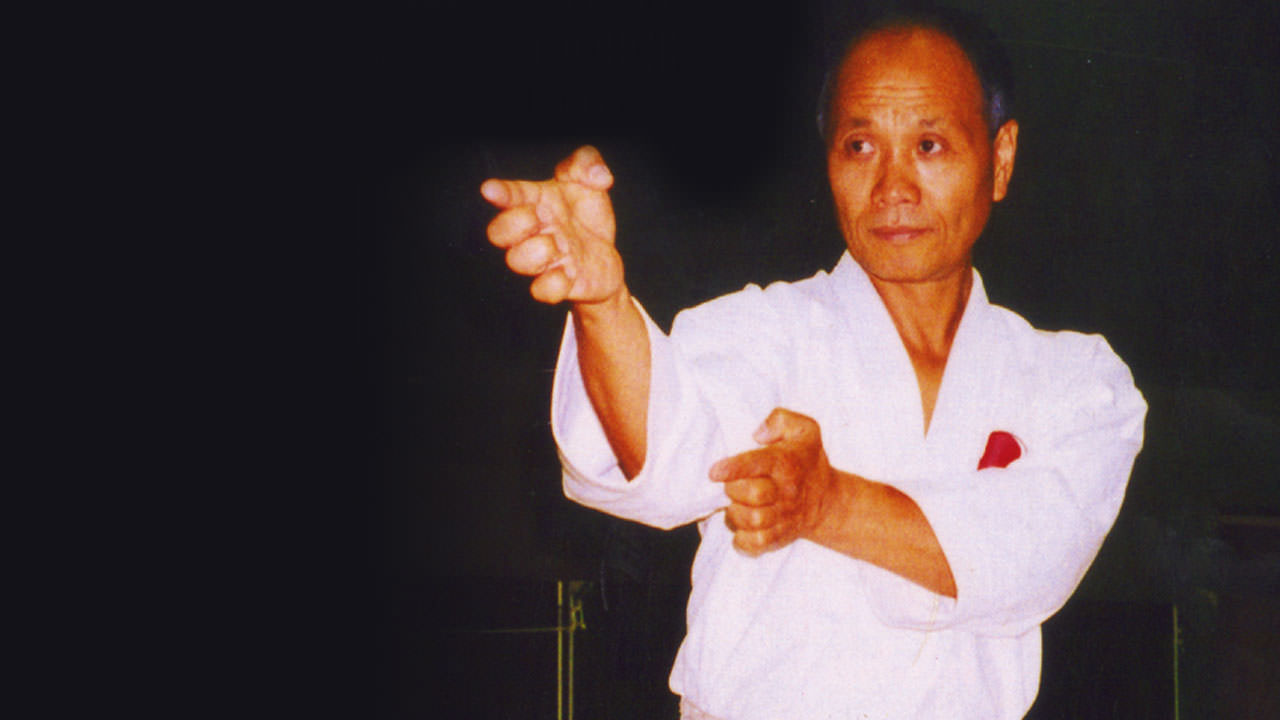 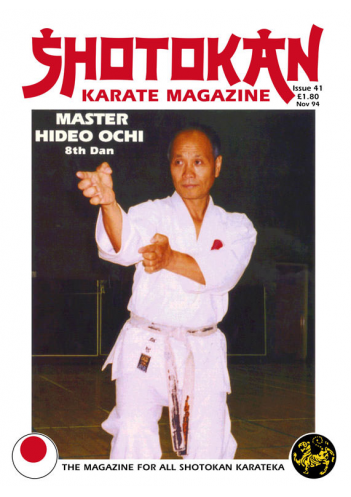 Here is the final issue of S.K.M. for 1994. We again have a wide variety of material in this edition; Technical, Historical, Philosophical and hopefully lots of information for Shotokan karateka.

There is one story you will definitely not have seen before unless you were in Japan in June 1922! Any new information on Shotokan's founder, Master Gichin Funakoshi, the father of modern karate, is obviously of great importance to this magazine.

We have a newspaper article written in June 1922 (The Tokyo Nichinichi Shinbun) reporting on this 'new' martial art from Okinawa being taught in Japan by Master Funakoshi. This has been translated into English and sent exclusively to S.K.M. I must thank David Palumbo Sr. of Rhode Island U.S.A. for his support in supplying rare material, information and photographs of Master Funakoshi.

I personally feel that one statement in the article could be the answer to a massive question that has been asked a thousand times by karate people. It clarifies a most 'Technical' point. It is - that many people have asked and pondered on why Master Funakoshi changed the emphasis or even abandoned the 'ju jitsu' techniques (armlocks, throws, holds, etc.) in kata applications in favour of hitting, striking and blocking techniques - Modern Karate.

This question now looks as if it has at last been answered with the first publication in English of this old newspaper article.

He (Funakoshi) said that karate, "May be also the best method to compensate the weakness of jujitsu against FOREIGN STYLE BOXING." Obviously meaning what we in the West know as the sport of BOXING. This is a most interesting technical point brought up by Funakoshi and could explain why he changed the emphasis in application. People have been guessing about this for many years. This could be a highly likely theory. He never mentioned this point in any of his books as far as I am aware but he must have been very impressed with western style boxing! He must have realised that to apply jujitsu type techniques against boxing type blows is very difficult, as anyone living in the 'real' world knows.

I'm always happy to feature the famous Stan Schmidt from South Africa in S.K.M. and we have a nice article from America by Rick Brewer about Stan's recent visit there. Also, there is a good interview with yet another JKA sensei (Tanaka faction) who may not be too well known outside Europe. Sensei Kazuhiro Sawada who teaches mostly in Belgium and Holland was the assistant to the late Sensei Miyazaki. I know from all the letters that people like to read about these different Japanese senseis. The thing I personally dislike is this; JKA (Tanaka) faction or JKA (Asai) faction. This really is a ridiculous situation. They are ALL JKA Instructors at the end of the day. Editor.

NO SUCH THING AS 'BASIC' KUMITE? <By John Cheetham.

You have all probably read or heard from time to time the theory that basic 5 step sparring (gohon kumite) or 3 step (sanbon kumite) as practiced in the Shotokan system are training exercises for 'beginners' and lower grade students and other than that are more or less a complete waste of time for Black-belts and senior grades! Is that right??

I can't believe the naivety of anyone with this contention. It's all well and good practicing wonderful and sometimes complex counters and evasive (tai sabaki) tactics to basic attacks as we know them, but, and a massive 'BUT', in reality everything depends on the speed and power of the attacker and the corresponding reaction time and awareness of the defender. This in a way is why there really is no such thing as 'basic' sparring, other than in terms of it being a basic format which is ideal for beginners to learn. But, to hold the idea that this is no good at all for higher grades is ridiculous.

Everything is relative and especially so regarding the ability and skill of the person doing the attacking.

For example if you partnered up for gohon kumite (5 step) with say, Sensei YAHARA or TANAKA and they were not in the mood for taking prisoners, then you would certainly not feel as if you were doing 'basic' kumite, that is for sure! You would need the take off speed of Linford Christie or you would be hit! We practice this so called 'basic' kumite to build up reaction time right from the beginner level. That is the important point and not the actual blocks involved.

The point is that if the person you are partnered with is the 'business', then this casts a completely different light on any form of kumite. With a good partner you will increase your mental awareness by 100% because you will be scared of being hit and it definitely improves your speed because for the same reason you have to get out of the way as fast as possible. It will also make you counter as fast and strongly as possible, to stop another attack, even if in desperation.

By doing 5 steps - this is simply to practice 'reaction repetitions' and it's as simple as that! SHOTOKAN is a simple method. We all know that no one would ever chase you with five consecutive oie zuki's! This is just a reaction training programme and not a street self-defence scenario.

Of course we should practice one step (ippon kumite) using all kinds of attacks and counters from varying distances etc, and we all know that it is far better to use evasive - lateral movement than stepping straight back as in 5 step but again everything is relative and if the attacker has blinding speed, coupled with power and aggression, then you do what you can!

I feel that many students would learn a great deal more by partnering up with someone for 5 step etc, who is better than themselves in all departments, speed, power and skill, rather than doing some fancy countering to mediocre attacks which in all honesty is regularly practiced at many dojo's with the misconception that this is advanced training!

Don't be brainwashed by new tricks, there aren't many. You could learn all the moves, which obviously is a good idea; - arm-locks, throws, grappling or whatever but if your reaction time is no good then it's all a waste of your most precious commodity, 'time'.

I'd rather do so called 'basic' kumite with a good opponent for half an hour than stand around at some seminar for five hours, freezing cold, listening to someone rattle on about how we waste our time with traditional training. You don't learn karate by intellectualising or standing around for hours doing nothing, you have to work - work - work. And not just with someone your own grade who is not going to push you.

This word 'BASIC' can be very confusing. I always remember Andy Sherry 7th Dan of the K.U.G.B. one of the most senior non-Japanese instructors in the world, saying that the 'basics' of karate are the hardest to master and really the word 'fundamentals' would be more appropriate.

Try this experiment if you think 5 step or 1 step kumite are just for junior grades:- Practice with the fastest - strongest club member and here is the crunch, in fact the most important point. Make the attacking distance 'real' and not the usual ten miles gap between opponents that you see so often. When they step back with gedan barai before the attack, the attacker should be able to touch your (defenders) chest (chudan) with gyaku zuki (reverse punch). Or in other words be at one arms length away in terms of distance.

Many masters of various martial arts have said time and again that you should never let an opponent enter your personal space. This is an imaginary circle surrounding your body at a distance of your own arms length away. Hence the famous saying, "KEEP THEM AT ARMS LENGTH." It is a natural action for humans to extend an outstretched arm to an aggressor, "Hold it right there buddy!!" It's natural.

I remember on one of Sensei Enoeda's courses at London's Crystal Palace some years ago, that during one of Sensei Kase's lessons he said the reason we practice basic blocks in up and down drill training with your front hand outstretched and the other in the ready to block or preparatory position as you step to block, is because it is teaching you from the beginning about keeping your opponent 'at arms length'. This answered a question I had often wondered about when doing soto uke or gedan barai, uchi uke etc, in drill training. For instance when you are about to step forward with your next block you extend your lead arm as if pushing someone away. I'd never bothered to ask why we did that. It is such a simple idea.

Getting back to how important your reaction time is, boxers practice 'reaction' training a great deal which also directly ties in with 'timing' practice and we all know that Boxing would not be where it is if it was not arguably the best combat sport-art. If you saw the recent fight with Oliver McCall and Lennox Lewis, this was a brilliant example of perfect reaction and timing. Emanual Steward, McCall's trainer said that they knew Lewis telegraphed his right cross and they had practiced over and over reacting to it, which is why Lewis was knocked out.

If you have ever trained with a boxer, even an amateur boxer then you will know that it is incredibly difficult to 'block' their punches especially in combination. Reaction training against really good attacks is far more productive than practicing complex counters to mediocre punches or rehearsed grabbing actions as seen so often. People practice all these fancy counters and moves but often overlook the fact that in reality that real attack will be completely different from anything you practice in the dojo with your club partner! In the final analysis, keep it simple, is always the best. In soccer for instance the simple - one-two near the box will inevitably end up with a good striker putting the ball in the back of the net. Or a boxers left jab followed by a right cross has done the trick countless times.

Every interview you read with the senior JKA instructors stresses that on the infamous JKA instructors course they practiced simple basic techniques and basic kumite over and over and these people are awesome! Traditional training has it's critics but I feel that they often miss the point completely. If you possess good reaction time and have a strong - fast punch, kick, strike or whatever, then you should be able to defend yourself on a one to one basis.

To finish, I reiterate that if you think basic gohon or ippon kumite as we in Shotokan know it, is just for lower grades and a waste of time for senior grades, then try it with a top-class opponent and you can guarantee that you will change your opinion!

Self defence is all relative to the ability of the attacker and this is a point often overlooked by people who do not follow the 'simple' path. I am not condemning 'any' form of kumite practice, I am completely in favour of varied practice. I am just pointing out that as the title of the article suggests, depending on the ability of your opponent, there is, no such thing as basic kumite.