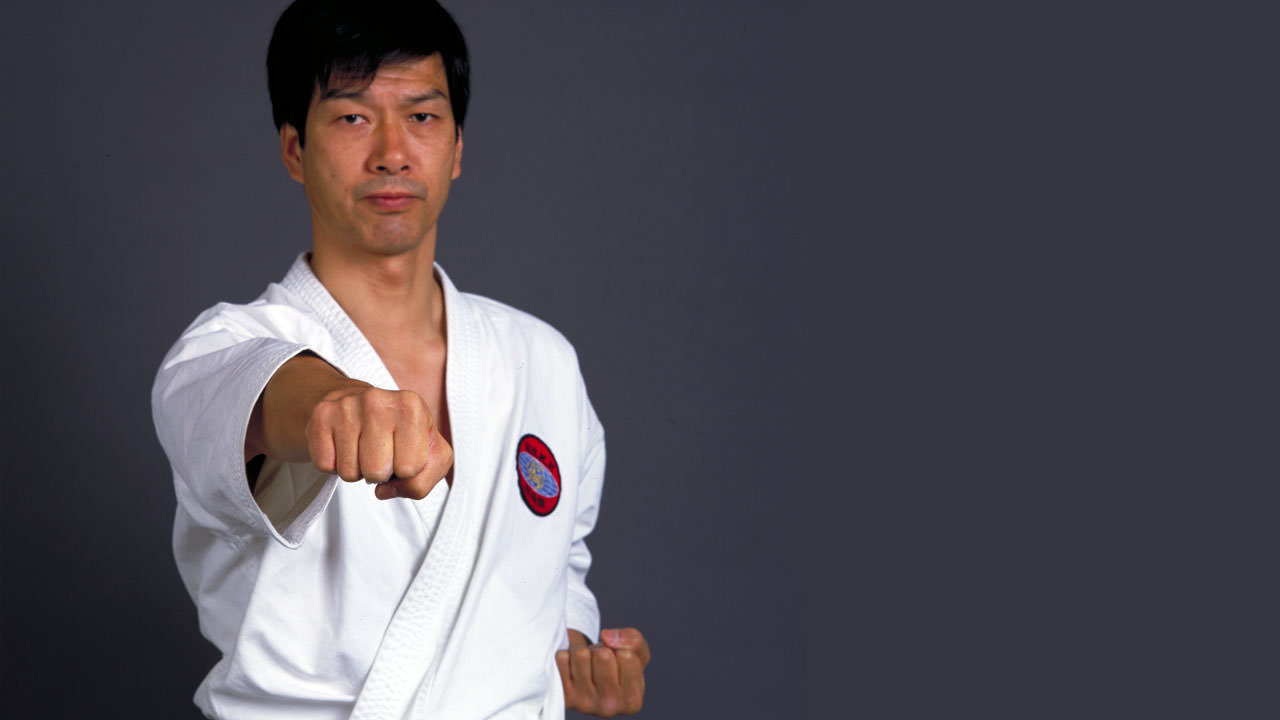 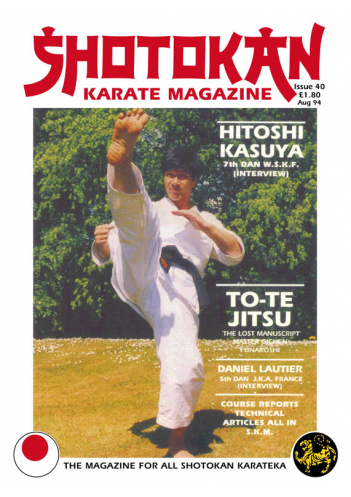 Welcome to the 40th edition of SHOTOKAN KARATE MAGAZINE which marks the first ten years of this specialist publication for Shotokan karate practitioners. I've really enjoyed producing the magazine all this time although there are times when I wonder what karate is really coming to but I will continue to keep the magazine as 'Traditional' as possible.

We have two good interviews in this issue with Sensei Hitoshi Kasuya 7th Dan, the Chief Instructor of the W.S.K.F. (WORLD SHOTOKAN KARATE-DO FEDERATION) who has a very rich pedigree in Shotokan karate. You may not know that it was Kasuya sensei who was in the winning Japanese Kata team in the now infamous tournament, the I.A.K.F. World Championships in Los Angeles in 1975 along with Sensei's OSAKA and YAHARA and also part of the Kumite team. He has some different and interesting things to say. A big thank you to Alistair Mitchell the senior representative to the W.S.K.F. in Great Britain for organising this exclusive interview for S.K.M, also to Harry Cook for transcribing the interview from tape and Mrs. Tomiko Mitsuoka 6th Dan for translating parts of the interview when Kasuya sensei was over here in Britain for a week long course in the south of Scotland at the end of June.

I enjoyed Daniel Lautier's interview because France has such a strong history in European Shotokan. France was the first European country to introduce karate, as early as 1950.

I am sure all SHOTOKAN people will read with great interest the article on the 'The Lost Manuscript'. This is quite a find for karate and especially for Shotokan because this re-discovered book was written in 1922 by Gichen Funakoshi, Shotokan's founder.

The publishers 'Masters Publication' of Canada have kindly given SKM exclusive original photo's from the book and information and material of great historical importance. The book contains 175 clear photo's of Master Funakoshi performing kata. Funakoshi also talks about karate training and it's values to groups and individuals. He goes on to teach all the basics of his art in clear, concise photo's with easy to follow instructions.

I read some fascinating material by the JKA International Chief Instructor, Master SUGIURA (ASAI is the other JKA Chief instructor) in an American magazine which might turn a few people's hair grey overnight with the mention of more 'changes' in kata. You will see some information in the 'Letters' page. SUGIURA sensei said,

"It will take a few years to make these kata changes and the JKA will accept existing versions or corrected versions for kata competitions or rank-gradings for the time being." I'm trying hard to get more information about Sugiura sensei but he is not well known outside Japan. He has some very interesting things to say about kata, for instance he says, "Each kata has a fundamental principle and affects breathing and blood flow, physical Chi, and it is the most important aspect of training. Therefore, kata is a basic principle in the study of Budo. It is a way of training for everybody. As the kata begins to affect you it becomes part of you. It becomes very personal, something original for yourself."

JUMPING' IN KARATE By Bill Burgar.

Jumping can be a very useful skill in the martial arts. There are many instances where leaving the ground for a few moments can be the deciding factor in an engagement or at least enough to give you a few moments to regain your composure. YAHARA Sensei, for example, is renowned for somersaulting backwards over a corner judge to get out of a nasty situation.

First we will start off by examining how to get the most height and or length in a jump without regard to any karate technique. Then we will look at the compromises necessary to make the jump into a martial art technique.

Let's look at a few sports that involve jumping and see how those athletes use technique to aid their jumping ability.

I recently heard about an event in the 'old' Olympics. The long jump pit was 50 feet long and the record for the longest jump went past the end of the pit! How did they achieve such huge jumps? The secret was that they carried a special weight in each hand and by timing their leap correctly they could use the weights to pull them forward in the jump and then when the weights started to slow them down they would throw the weights backward so that the jumper was propelled forward (rather like using a jet engine).

The point that this demonstrates is that by using your arms (albeit without weights most of the time) it is possible to increase your height or length of jump.

The arms are important in jumping but so is the rest of the body. Technique is vitally important and the largest gains can be made by analysing and improving your technique. That is not to say that you cannot improve by other means.

I recently received an electronic mail message from Kelly Dooley, a Taekwando practitioner and keen basketball player from Texas and he says, "At 6 feet 4 inches tall and 220lbs, I find myself at a disadvantage in sparring when I leave the ground. However, in basketball you can't get enough height."

He continues, "My personal observations: strength training has proven (for me) to be very 'ineffective' for increasing jumping height. The most effective means I have found are:

Strength is not a big requirement in jumping, being light weight helps you but you must have sufficient strength to lift your own weight. However, losing weight just for jumping is not a sensible idea for a karateka. We need to find a balance between having sufficient mass to generate impact and being light enough to move quickly.

Since jumping forms a very small part of our activities, losing weight just to improve our jump is not a viable proposition. So, the best way for us to improve height and length is to improve technique.

The secret in jumping well lies in getting as much of your body moving upwards as soon as possible prior to actually leaving the ground. Try this exercise:

There are many factors to take into consideration. For example take Tobi Yoko geri (jumping side kick). This technique can be performed from a close or distant position. If you are close and your opponent is punching at you, you will require your arms to guard. However, if you are further away you will not need them for guarding and can instead use them for gaining lift.

Lets look at a few jumping techniques in particular. First the jump in Heian Godan. The main requirements here are to leap from Renoji dachi (L stance) turning in the air through 90 degrees, keeping the legs tucked in and bringing the hands to the sides. Then on landing bring the hands forward in an X block (juji uke) and sinking into a low kosa dachi (cross leg stance).

In this instance when the arms are brought to the sides they cannot be thrown upward, therefore they must be thrown forward in a circular motion a little earlier and then pulled upward towards the waist as you take off. This is the only upward motion they can make but it is better than none at all.

At the end of Enpi kata the jump is simulating throwing someone so in actual fact you should try not to use your arms so much. (Nakayama Sensei said that the reason you jump up high at the end of Enpi is because kata is done alone, you practice lifting your own body-weight in this instance as opposed to actually lifting an opponent. He also said that to achieve great height when you start the jump - transfer your weight onto your back leg (left) and use the drive from this leg coupled with the leverage and momentum gained by lifting the (right) - knee, as fast and high as possible as you take off). The purpose of simulating the throw is to develop strength in the legs and hips and as such trying for extra height by using the arms is going against the purpose. Therefore you should jump as high as possible without using the arms. If you do use your arms then you are guilty of just trying to look good by jumping higher than anyone else - don't loose sight of why you are performing a particular technique. Of course in a competition ill informed judges may be looking for a spectacular jump in which case you may make the choice to use your arms to make it look better, that is your choice.

Nidan geri (double jumping kick like at the end of Kanku Dai kata) is where you leap into the air and kick at chudan height with one leg and then at jodan height with the other leg. This requires good timing. It is important to snap the legs back quickly otherwise the top half of your body will swing forward in mid air, placing your face nearer to your opponent and in a position to be hit. Again you can use your arms to a certain extent especially if you are starting at a distance from your opponent but you must take up a guard in mid air ready to defend or strike as you land.

In kata Kanku Sho there is a turning jump where you take off facing obliquely upward and turn in mid air to land in a horizontal position. Many people make the mistake of jumping too high here.

Probably the most famous and difficult jumps of all is the one in Unsu kata. You have to leap up into a tucked position, rotate 360 degrees and strictly speaking you should kick, 'jumping back kick' on the way down, although people that can actually do this are very few and far between. The take off position is with the left hand stretched out in front of you and this makes using this for extra height very difficult. The right hand can be used however, as can the right leg which kicks, mikazuki geri (crescent kick) into the left hand just after take off.

Jumping is a skill that needs a great deal of practice to perfect. Work on your timing and the use of the whole body to improve your technique.