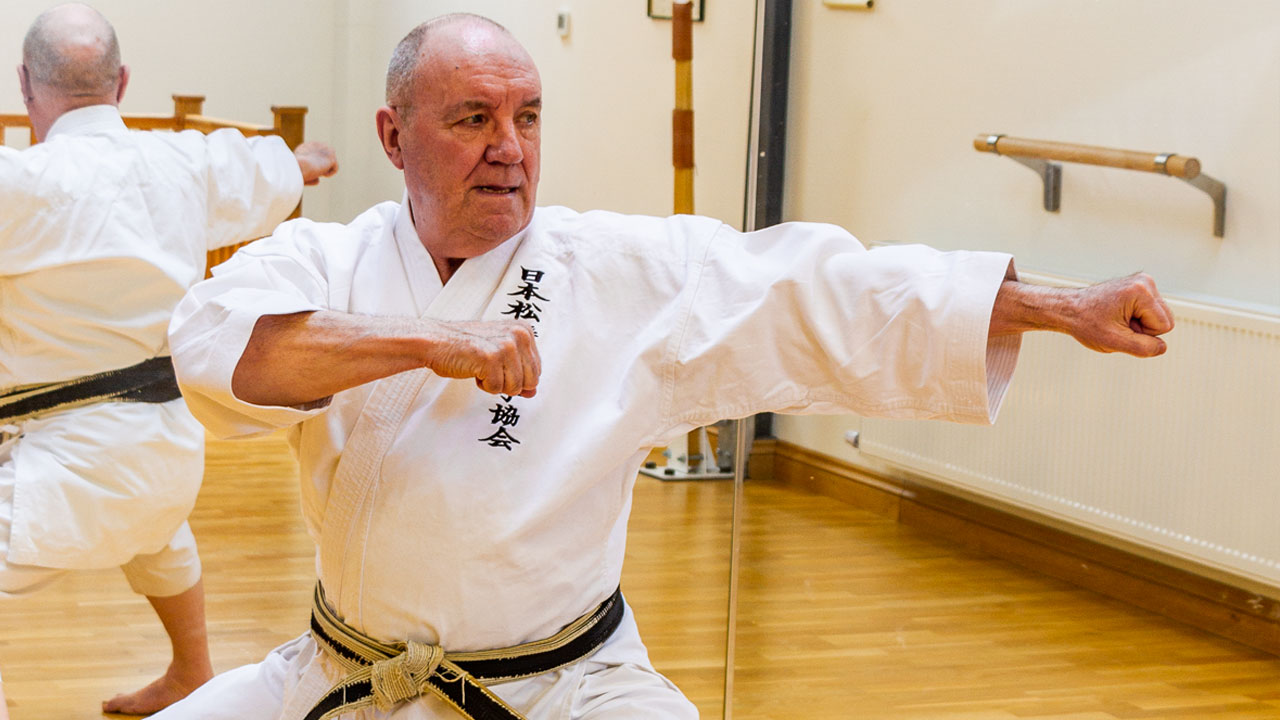 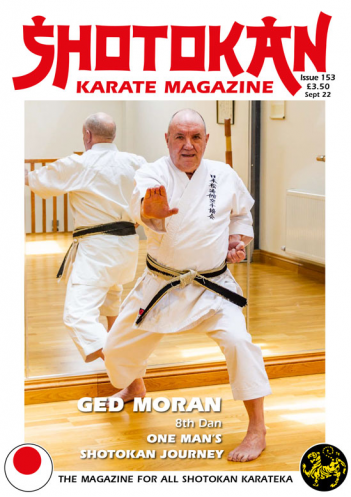 SENSEI GED MORAN 8th Dan. Interview By John Cheetham. GEDAN BARAI – A DIFFERENT PERSPECTIVE. By Scott Watson. LETTERS TO THE EDITOR MOVING FROM ZERO TO MAXIMUM. By John Cheetham. FROM OPEN HAND STAB TO CLOSED FIST PUNCH AND BACK. By G. Laich, M.D., Ph.D. WHAT TO DO WITH WORN OUT TOOLS. By Paul Mitchell. DON’T FEAR THE FEAR. By Matt Price. TRAINING WITH MAYNARD MINER: THE 90s AND BEYOND. By Eon W. Waldron.

This edition features a very well known Shotokan sensei in this country and in the USA also, where he has taught at many different dojos in the past. Many of you will know sensei Ged Moran from his ‘Legend Productions’ which are truly ‘legendary’ accounts of great Shotokan Kumite and Kata events from the 1980s-90s. It’s some of the best, most dynamic Shotokan karate footage ever recorded.

Ged won’t mind me saying that he is definitely from the old-school, from the take no prisoners brigade (56 years Shotokan training starting in 1966). This interview might be a bit of a shock to some readers when you hear about some of the early training methods. For example, the exercise nick-named ‘The crate’ was used to ‘enhance’ stretching at the Liverpool Red Triangle dojo! But I can tell you it’s all true, in fact, I know that sensei Moran is purposely holding back quite a bit.

It was very common in the 1970s and 1980s for Karate-men to work on the Doors of Nightclubs. Often, in truth, to test out their karate skills in the real world. That’s just how it was in those days and not only in this country but worldwide.

These were very different times in the Karate community where it was known primarily as a ‘Fighting Art’ back then, only later did the ‘Do’ of Karate become truly understood and seriously taken on board.

Many times there was a softer side to many of these characters. In Sensei Ged Moran’s case, he has for many years done unpaid voluntary work at St Ann’s Hospice in Manchester. The Head day care nurse there calls him... a ‘lovable delinquent’! Ged says, “it’s the fantastic people at St Ann’s that are the heroes.”

I hope you enjoy this in-depth story with a real Shotokan stalwart. We have been friends for many years and I certainly enjoyed conducting the interview. Chatting before the interview I mentioned to Ged about some of the online comments I’ve seen criticising various karate-ka and their training methods etc. Ged gave me a brilliant answer, he said......

“If I took notice of these keyboard warriors, and technical pedants, I’d laugh myself into a coma.”

Dr Bill Laich’s article in this edition, is historical in essence, explaining as to how our techniques evolved, developed and changed: many open-hand techniques were lost in favour of the closed fist punch which was used far more in the advent of competition from the mid 1950s onwards.

Matt Price’s article deals with that old ‘fear factor’ once more, which can be a massive problem for, not only students of a few years experience but for all of us. It rarely goes away. But as Matt points out, it’s how we deal with it that really counts.

One key part of Paul Mitchell’s article describes a different way of looking at the advantages for using fudo dachi. He stated; “I can’t get away from the idea of fudo dachi being a practical position for combat. I find that fudo dachi is a great training tool for the development of the correct condition of our pelvic area.”

My article focuses on a detail which is vital for all karateka both young and old and that is, for practical, realistic purposes, to maintain speed over a short distance.