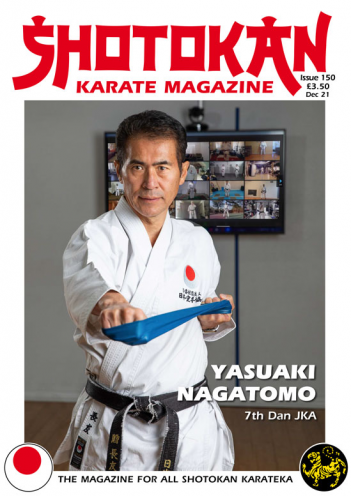 YASUAKI NAGATOMO 7th Dan JKA-WF. Interview By Mark Jeffery. LETTERS TO THE EDITOR SOME NOTES ON KARATE AND MEDITATION. By Dr Wolf Herbert. NON-ZERO-SUM GAME: BUDO APPROACH TO COMPETITION. By Albert Cheah. A LIFE SPENT IN TRAINING. By Paul Mitchell. REVISITING HIP ROTATION: WHAT’S THE BIG DEAL? By Bruce Green. THE SUBTLE ART OF KICKING SOMEONE IN THE HEAD. By Matt Price. WHY IS KARATE AN ART? By Barry Rodgers.

Sensei Yasuaki Nagatomo 7th Dan JKA is our featured interview in this issue. Chief instructor of JKA-WF America. He is originally from Kyushu, Japan, and has studied Karate since 1980. Sensei Nagatomo has been training and teaching in Albuquerque, New Mexico since 1986. Thanks to Mark Jeffery, Julian Fisher and Wayne Smith for their sterling work preparing this interview.

In this era of Zoom karate training and teaching, Nagatomo sensei has some innovative ideas and practical solutions to this new phenomena, caused by the problems created by the Covid 19 virus when all dojos were closed. Let’s hope this dreadful period in our lives is coming to an end. Thank goodness many dojos around the world are back training now.

This I feel, is a special edition (SKM Issue 150) of the magazine. I never thought all those years ago when I published SKM Issue-No 1 (November 1984) that we would reach the dizzy heights of 150 editions of the magazine but here we are. And I can proudly say that we have published this specialised quarterly Shotokan Karate Magazine every three months without fail throughout those 37 years, never missing an issue or being behind the time schedule.

I’ve seen many Karate and Martial Arts magazines come and go over those years. I have solely stuck to what I know about first-hand and what I have personally practised for almost 50 years; the art of Shotokan Karate-do.

We constantly receive a huge amount of new articles and interviews and unfortunately we can’t publish all of them in the magazine. We have to choose which will appear in each edition and a lot of good material is lost to the readership. You can now view some of these extra articles on the SKM website (go to Magazine and click-on ‘Articles & Interviews’). We have more in the pipeline which will be published regularly on the SKM website. This hopefully will be an added bonus for all our worldwide SKM subscribers.

We don’t do Book reviews anymore in the magazine, however, I wanted to mention this for those who are interested in the history of Karate. I was sent a book recently, ‘Anko Itosu: The Man. The Master. The Myth.’ by Thomas Feldmann, it dives into the life and times of Itosu. A totally different karate book from a historical perspective, especially as it also talks about Shotokan’s founder, Master Gichin Funakoshi. The work and research that has gone into this book is commendable.

There are some quite diverse articles in this issue of SKM but I have to mention the great article by Dr Wolf Herbert. As Wolf said to me in an email....“My intention was to bring the topic “meditation” right down to earth, because there is always such a lot of mystery-fuss made about it.”

There’s a ‘Letter’ in this edition by Dr Guillermo (Bill) Laich about Sport Karate in the recent Olympics, which sums up my feelings on this event entirely!