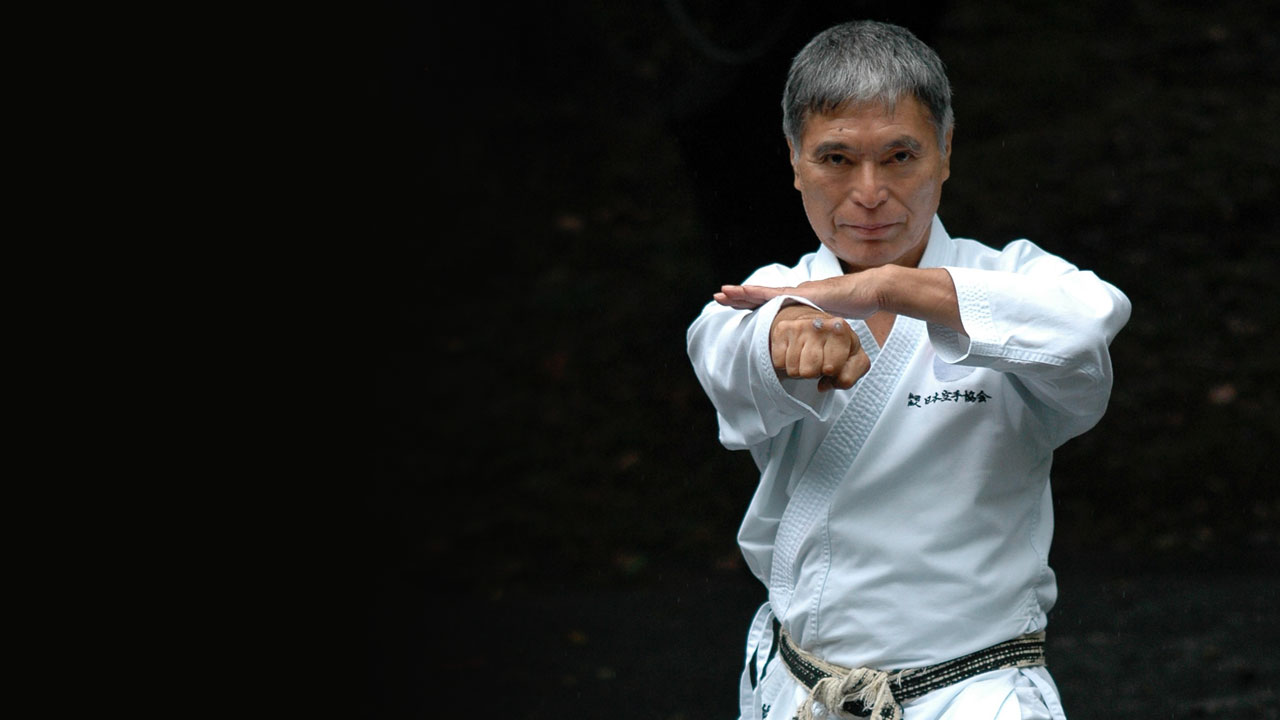 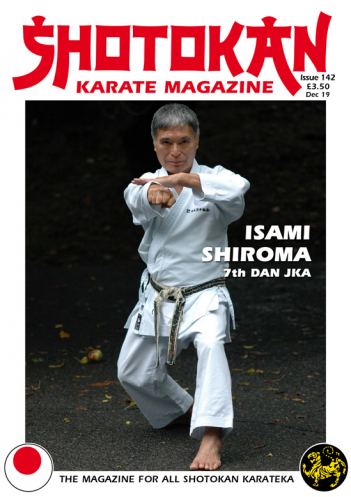 In this issue we feature an interview with sensei Isami Shiroma 7th Dan JKA based in Queens, Long Island, New York. Shiroma sensei although completely dedicating his life to karate-do, is not a full-time professional instructor, he has a business in antique jewellery, specialising in wristwatches, as well as being a keen photographer who has had his work exhibited in Colombia. Originally from Okinawa, where he started karate in 1963, Shiroma sensei moved to Hawaii in the mid-1960s where he began his Shotokan journey and trained with many prominent JKA senseis including the legendary Asai sensei who was based there at the time.

Many readers have commented that they find it very interesting when a Shotokan sensei such as Isami Shiroma is non-professional, because then they obviously don’t have the same commercial interest as a professional instructor – who, in many cases, for purely financial reasons, have to take into account their business and keep the students (for the want of a better word) happy, and have to rely on, as we say here in England, “Getting bums on seats!” Namely getting a continual stream of new students through the dojo door.

Now, if it’s your sole income/business, as martial arts are these days, then so be it, it has to be done. Even if you are a staunch traditionalist and hate the idea, you have to admit that martial arts is a huge business industry today in most countries.

There are two technical articles in this edition of SKM. One by JD Swanson (godan) who holds a PhD in integrative biosciences, explaining the subtle difference between a block to deflect the blow, as opposed to a block as an attacking technique. (See Michael Busha’s article on our website in issue 140 – ‘Uke As Ikken Hissatsu).

If you study this article by JD Swanson carefully and give serious thought and much practise to this deflecting blocking technique which JD describes in great detail, you will save yourself a great deal of pain, bruises and possibly permanent arm damage throughout your karate life. To get the timing right on this is no easy feat, you have to constantly work on it, but it’s worth the effort as with all sensible alternatives.

My article might be a bit controversial, I’m not a great believer in the sole focus being the end/completion of a technique. For me the beginning of the action is equally, if not more important.

The global Shotokan family lost an influential figurehead with Sensei Stan Schmidt’s death on October 7th. Our sincere condolences to his family, friends and students. Stan sensei was probably the most internationally recognised non-Japanese karate-ka and a highly respected teacher. Author of several inspirational books emanating from his karate experiences. SKM has been honoured to feature Stan’s articles and interviews, the last being published in Issue 131 March 2017. Stan Schmidt Sensei was dedicated to Shotokan for over six decades, continually studying to further his understanding of the art. May his spirit continue through his loyal students. RIP Sensei Stan Schmidt.

After 40 or 50 years of continuous karate training, studying and analysing the art, we all form our own personal and often unique ideas and concepts on many different aspects of what we are trying to achieve in karate, both physically and also mentally, meaning how it effects and influences one’s life in general. For me, many thoughts on karate have changed and quite dramatically over the years.

I now believe that there were, and still are aspects of Shotokan training and emphasis that are in the wrong order!

Firstly, I believe we should have started our karate by impact training from day-one, the beginning, not years of fresh-air techniques! Secondly, with virtually every karate book I have ever seen, the emphasis has been on what the arm, hand or foot technique/position should be. And maybe the trajectory of the technique. We get the usual ‘apply the hips’ etc., but very rarely in-depth details of the sequenced body action from the floor-up, which is totally vital in delivering a decisive blow be it a punch, strike or kick.

My view now is that there has been too much emphasis on what happens at the ‘end’ of a technique and not what happens at the beginning. You could read into this the concept of so-called ‘kime’. Most books describe the Shotokan method of kime/focus (in the case of a punch in this description) usually something like this....

“As the fist nears the target its speed is increased to its maximum point, and at the moment of impact the muscles of the whole body are tensed. This, is in essence, what ‘focus/kime’ in karate means.”

This to me, implies that the end of the technique is the most important point. Whereas in my opinion it’s equally important what happens at the beginning of the technique. How the action starts massively affects how much power the technique ends up with! In Shotokan especially, we have been introduced into the concept of focussing mind and body musculature at the end/completion of techniques. I talked about this at length in the last issue of SKM – ‘Kime Re-Visited’.

But I have found there to be a flaw with this, because (if we are talking about a real situation where you have to defend yourself) it depends greatly on what the opponent does – and which I hope to explain and demonstrate in the photo’s and text of this article.

Here is where my Bow & Arrow analogy comes in.

Purely for simplicity’s sake, and metaphorically speaking, let’s compare the actual arrow ‘head/tip’ (which does the damage) to our fist or knife-hand or whichever hand/foot technique we are using, (which does the damage). The arm is simply the agent for the delivery, like the arm/shaft of the arrow. I liken the action of the bow and string, to the use of our body action. Now, without the action of the bow, the arrow is virtually redundant. Likewise without the use our body to propel the arm/fist or knife-hand etc., the same applies.

Of course the bow without the arrow has limited use (as does the body without the arm/leg). So, the bow is more important than the arrow, it’s the start of the process of inflicting the damage. And here is the analogy: without the body action (in the order of legs, hips, torso, arm) to propel the fist etc., we would just be punching with the arm alone which is nowhere near as powerful or potent as utilizing the speed and weight of the body behind the blow.

Another crucial point is that by focussing on what happens at the end or completion of a technique, to me this differs from the Archer’s focus, namely, (his focus is on the ‘target’). In our case, if we focus on the end of the technique, what happens if the blow is stopped half or quarter way before completion?

If you look at the photo examples below you will see how we can practise for this scenario by using a partner to assist by holding a pad and making it difficult for the puncher to complete his punch!

If you punch for example with a gyaku zuki into a pad held by a training partner, (see photo’s) focussing on the power at completion of the punch as we have done for years and years in karate, especially Shotokan, this is fine, it works. However, if your partner quickly moves-in on you before the punch is completed, say, half/quarter way through the action of the punch, see what happens? The punch is rendered virtually useless or certainly nowhere near as effective. Simply because your focus has been on the end of the technique (the arrow head/tip) instead of the focus being on the start of the technique and the speed and dynamic body action to propel the arm and fist. Meaning, the start of the technique is where the power comes from.

If you forget about the completion, and focus on the start, the drive from the legs followed by the rotation of the hips and trunk in conjunction with the breath – as long as you have a good, strong fist position, (which is vital) the arm should just fly out like a missile with unimpeded speed which ends with the fist doing the damage at whatever point or distance it lands.

When a boxer throws a punch, it’s the ‘target’ he is most interested in hitting, be it the chin or solar plexus for example. The same goes for the Archer when he fires the arrow, his target is the main concern. It’s the body action of the Boxer that creates the power in the punch and the amount of torque in the Bow-string that creates the power to fire the arrow. If they are both on target, there should be a positive result.

I saw a TV programme where a young boy started Boxing training. The first thing they did was put gloves on him and he hit a bag! His focus was on the target and making impact. Obviously there was no power, no technique, he’d just started.

Now, if that same kid had started karate training, he would start by punching fresh-air and with no target (impact point) to aim for! – WE, in karate, I feel, start in the wrong order! And quite often continue like this, only being introduced to impact training years later! A massive mistake!

I always seem to mention Boxing in my articles but let’s admit it, they are the punching experts! Apart from that I am a huge Boxing fan and have been since I was twelve. The days of Sonny Liston!

Getting back to our problem... What I’m basically saying is, it’s easy to punch a pad or makiwara with gyaku zuki and concentrate the power at the end of the technique (2nd photo below). However, when the pad-holder moves-in on the punch at speed, you never get to the ‘end’ of the technique!! What then?

With your partner; have the puncher close their eyes so they don’t anticipate when you’re going to charge in! If the puncher is focussing totally on the end of the technique they will come unstuck. Whereas, if you focus totally on the speed of the initial body action (drive/rotation) and breath to propel the punch and just let the arm fly out at maximum velocity like the arrow from the bow, as long as your fist is strong, it does not matter at what distance the punch makes contact/impact, it will be effective, as you can see from the final photo, when he’s stopped half way.

With regards to the Bow and Arrow analogy – it’s metaphorical, I don’t mean literally that everything is the same, it’s just the idea that there should be no tension in the arm (like the arrow shaft) before the punch is thrown. The torque is in the bow-string before the release of the arrow.

It’s the homogeneity that I am talking about here. It’s the speed and release of the rotation of the body which fires the punch (arm and fist). The Archer will focus on the target with calmness, relaxation, before releasing the arrow. We should apply that same principle to our karate!

After so many years of training, for me, concentration on hitting the target is key! Karate has a simple principle: creating the power starts from the floor/legs, through the hips and torso at maximum speed to propel the bodyweight, combined with a blast of breath from the stomach/hara to conclude in the arm firing out, with the fist doing the damage on impact.

(Thanks to two of my fellow students, John Morris (left) and Graeme Armitage (right) for help with the photo’s). Editor.