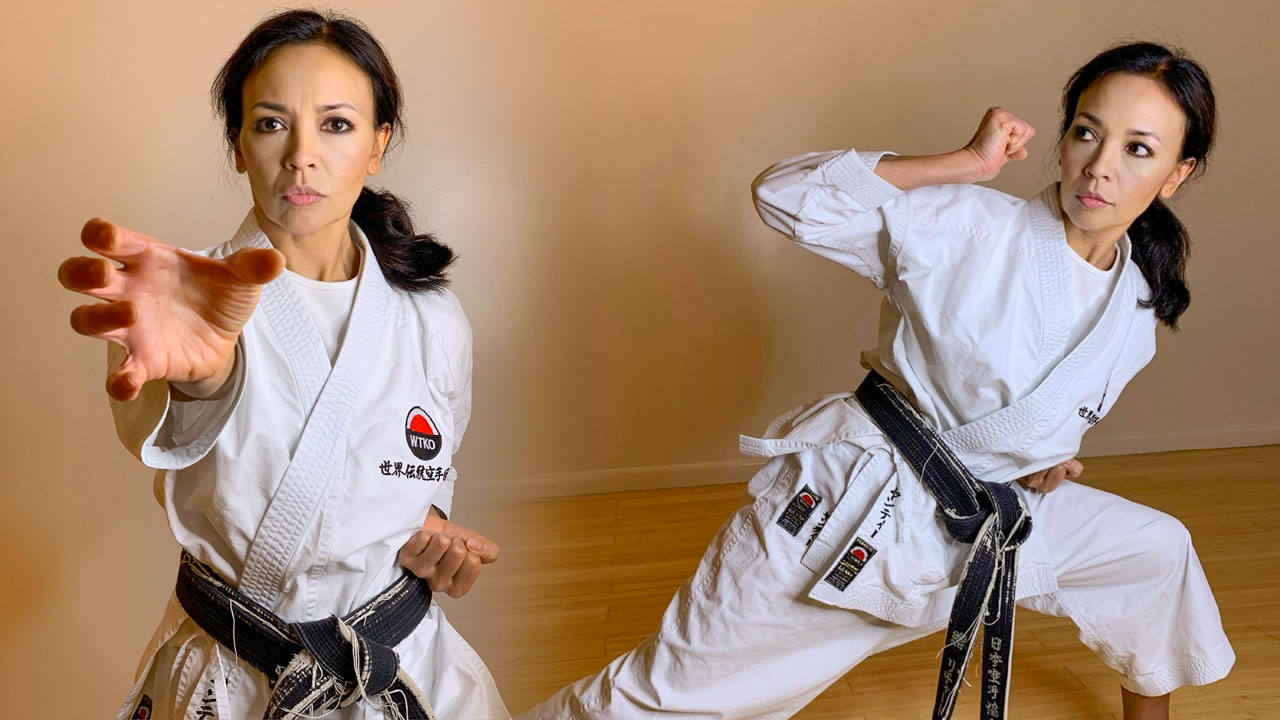 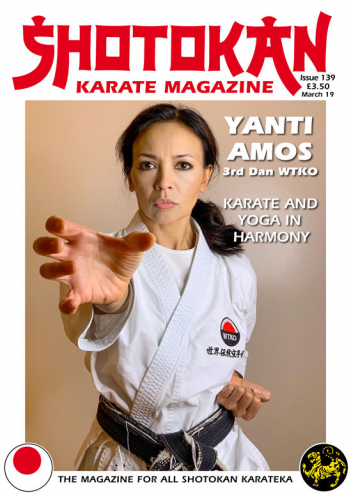 YANTI AMOS 3rd Dan WTKO. Interview By Clare Worth. ‘CONTACT WITH THE ENEMY.’ STRATEGY IN COMBAT. By Peter Consterdine. MASAHIKO TANAKA 8th Dan: THE LAST TRAINING IN EUROPE. By Dr Anton Sàlat. SENSEI DEREK KEALY 7th Dan KWF. Interview By Barry Russell. THE ART I LOVE. By Paul Mitchell. A VISIT TO THE HOITSUGAN DOJO. Report By Simon Bligh. LETTERS TO THE EDITOR. IN DUE TIME: THE IMPORTANCE OF KATA ORDER. By Debbie Hoplamazian.

It’s been quite some time since we had a female karateka on the Front Cover of the magazine, far too long some will say. Of course SKM has featured many female karateka in the past, and here we have an interview with Yanti Amos, who apart from being an excellent karateka, is also a professional Yoga teacher in New York. Yanti’s husband is sensei Richard Amos 7th Dan, the WTKO Chief Instructor.

We often read about karateka who also practise Tai Chi but not so often when the other art is Yoga. SKM secretary Clare Worth conducted the interview and also was very impressed with Yanti’s karate technique, spirit and attitude after being her training partner on a course in Manchester, England, last September.

Clare said to me after the seminar that this lady would make for a great interview for SKM, and now I can see why. I think it’s a terrific story covering a wide variety of topics and also a way of looking at karate-do from a female perspective.

I’m always fascinated when a serious karateka is also an experienced teacher or a serious student of a softer art like Yoga or Tai Chi. They seem to have a different take on what we do. Two great Shotokan examples are the late Asai sensei who studied the Chinese martial arts and of course Kanazawa sensei who has practised Tai Chi for over 60 years. Interestingly, many older Shotokan students grounded in ‘hard’ karate often make their karate softer as they age, usually when they finally figure out that the power actually comes from relaxation.

I remember the quote from the late JKA Chief Instructor Masatoshi Nakayama who had spent time in China studying their martial arts; when asked, what was the difference between Karate and Tai Chi... He replied....“Karate develops strong men, Tai Chi develops Supermen!” I think it’s fair to say that Paul Mitchell’s very popular SKM articles are like a fusion of Shotokan Karate-do and his Taijiquan influence.

Many of the older senior Japanese Shotokan senseis are now retiring or curtailing their karate teaching/travelling activities. One such very famous name, Masahiko Tanaka sensei is featured in this edition in a celebration of his final visit to Europe. These are the legends of post war Shotokan karate-do and it’s the end of an era which started out in the early 1960s when so many young Japanese instructors from the first JKA instructors course spread the Shotokan message in various countries throughout the world.

There’s an article in this edition by Debbie Hoplamazian, where she brings up a point many senior karateka feel strongly about: why it’s important to teach kata in a structured order. Unsu, Gojushiho dai/sho etc, are not for kyu grades, they haven’t yet acquired the expertise at this level.

There’s often differing opinions about the way that self-defence and practical-karate are practised. Many people feel that sometimes it appears to be over-complicated, unrealistic and often misses ‘one’ vital element. Therefore, I urge you to read Peter Consterdine’s brilliant article on that ‘one’, vital element – ‘Strategy’.

Sensei Tanaka Masahiko finishes his teachings in Europe with a legendary Karate course.

“Meet the Legend” was the motto of the course to which the Karate dojo “HakuRyuKan” from Lenzkirch-Kappel in Germany had invited Tanaka sensei. And he is a living karate legend: former world champion, towering fighter, author of a great kumite textbook, he was the only instructor an honorary video of the JKA was dedicated to.

Tanaka sensei had his only date in Germany in the tranquil Black Forest community Lenzkirch. Famous as a fighter as well as a trainer, Tanaka sensei often visited Germany in the 1980s and 90s and was also invited to coach Gasshukus. He taught all over the world, and his one-week-classes in Vienna and Budapest are legendary. But he had not given an official course in Germany for 25 years.

An illustrious band of karateka from 2nd kyu to 8th dan had come together, and everyone was glad to be able to attend this course. Sensei Tanaka had only allowed a little over 100 participants, he wants to have everyone in sight. But also numerous karate athletes had appeared to watch, as there were no more tickets since a long time past.

Two sessions, three and a half hours of Sensei Tanaka, this promised sweat and concentration, but also imparting the important little things that make the difference – between simple strikes and effective techniques – between pure sport and lifelong healthy karate training. To get this knowledge some of the participants had travelled more than 1000 km.

The course took place in Schluchsee, because of the larger hall, and already at the beginning Tanaka sensei showed his special spirit: The place of the Sensei during the greeting ceremony remained empty. Tanaka sensei joined the group as the highest ranking sensei, and the “otagaini-re” showed that the karate way was meant as a joint exercise. But Tanaka sensei took the lead, and he informed us of his thoughts and feelings in certain situations of his (karate) life.

This attunement gave the many, often high-ranking and experienced karateka a deep insight into Tanaka’s spirit and thinking. And his description of the mood at the legendary competition in 1980 in Bremen had a tense audience, because many of the listeners were already in karate. These explanations and teachings were quite challenging to translator Rene Winkler from Dusseldorf, also an experienced karateka, but he did his job brilliantly and thus contributed significantly to the success of this course.

Tanaka sensei apologized to all of us that he had only one day to teach, and therefore no real training success was possible. Some people may be dissatisfied because he can only show us some basics, but cannot really build them up. But almost immediately Tanaka became a sensei. Already getting up from sitting he asked, are we rising, in full control and readiness, or are we just getting up?

It was clearly visible, Tanaka Sensei pays attention to the smallest details. Etiquette, manners, posture and constant vigilance are extremely important on the way to perfect your own personality. Small movements are high art with him, the flowing movement of his getting up is impressive, smoothness instead of clumsiness, even at 77 years old, he can pass immediately from the seat into the fight. Likewise, he can attack directly from the seat – he showed even at a high-aged his maegeri from seiza, perhaps a bit slower than before, but still perfect.

His karate focuses on the triad of “technology – power – spirit”. And his motto ‘mukin shori’ - “the road to success has no shortcut”, emphasizes that only sustained effort and continued practice allow for deeper results and insights.

Accordingly, we practiced Heian shodan – and Tanaka sensei soon brought us to experience this kata intensely and consciously; as it is supposed to be every time in karate, but often it is not. Already the first technique became the touchstone for everyone. Anyway it became obvious to everyone, without the right spirit, it is nothing. He always demands one hundred percent from himself and also from his pupils. 80 or 90 percent is not enough for him, he is known for his hard training sessions with thousands of kicks or punches. Even with high-ranking black belts he looks uncompromisingly for errors, regardless of the Dan degree. This could also be experienced by some participants, whose insufficient understanding was immediately revealed.

Tanaka sensei emphasized the diversity of physique between Westerners and Japanese. Because of this, as well as because of their life habits, Japanese people often have smoother ankles. Therefore, they prefer techniques like Oizuki, and they often perfect them.

Westerners cannot usually do the same, because their body is different. We need to understand and use our body the way it is, Sensei emphasized. So do not want to achieve something that is not possible, but perfect what is achievable.

Westerners cannot usually do the same, because their body is different. We need to understand and use our body the way it is, Sensei emphasized. So do not want to achieve something that is not possible, but perfect what is achievable.

I must admit I don’t even think about what I would do in a potentially dangerous situation anymore, if it happened then hopefully all the years of training would kick in. The last fight I had was about 35 years ago and the training kicked in very quickly then, I hope I don’t have to find out if I could still do it. I bet this is the same for many people reading this now. This does not mean that I don’t still want to have strong, effective technique which surely is all part of the reason we train, but I have no interest in even thinking about having an actual fight again. I’ve experienced a couple of road rage incidents and talked the other person out of doing anything stupid before any punches were thrown. If that’s not self-defence, then what are we doing? Does it have to get physical?

Which brings me onto another point with regards to the self-defence aspect of how we train. I feel that most dojo do not spend enough time (if any) practicing open-hand techniques, e.g. shuto-uchi, haito uchi, teisho uchi etc. With so much focus on sport karate (punches to score points), open-hand techniques have been virtually abandoned in many dojo. What a great pity this is because here lies the opportunity to learn to get rid of all that tension when executing techniques.

Also, in terms of self-defence, it’s far easier for mosTanaka sensei and his wife Emikohnique to a vital area (eyes, throat, neck etc) just usinTanaka sensei and his wife Emiko were presented with a cake in honour of their Golden Wedding. Here’s a question; how often do you practise open-hand techniques as opposed to punching or kicking techniques in your dojo? A lot less I would imagine, maybe even just in kata?

Especially the “intrusion” in the technique was emphasized. Tanaka sensei showed us that the total energy transfer takes place in the last inch between contact and penetration. This was exactly the “one inch punch” that some had admired in Bruce Lee, and that also belongs to karate. And here, too, the whole range of the karate world was seen, because some of the practitioners misunderstood Tanaka sensei thoroughly. But he did not allow this for long. These comprehension errors had been disclosed and corrected. And he wanted us to understand and execute exactly this intrusion, this impact also and especially in kata.