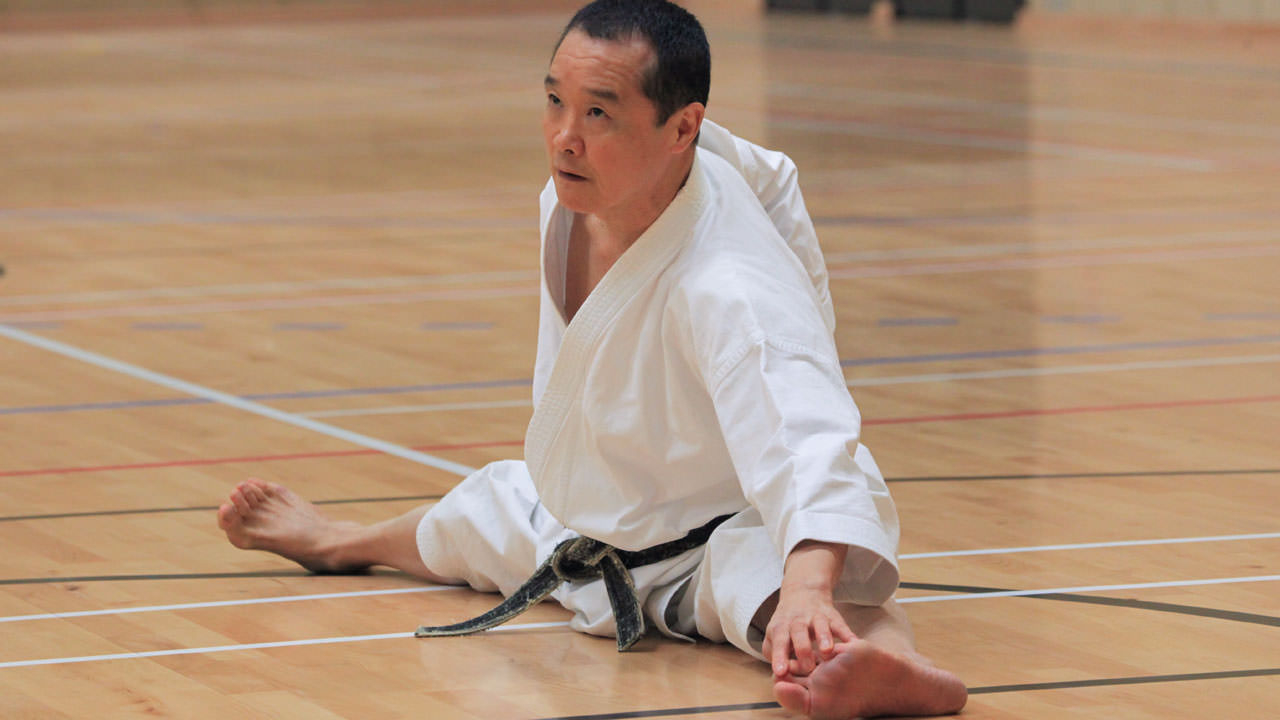 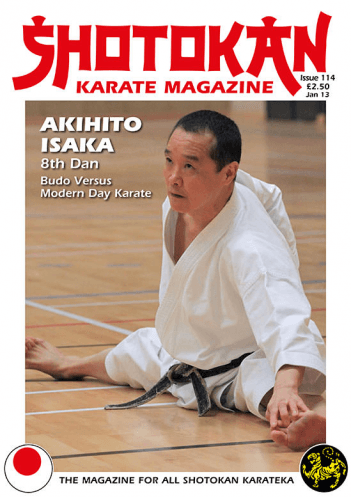 We have in this edition of SKM what I feel is a fascinating interview with Isaka sensei 8th Dan, assistant instructor to Yahara sensei KWF. A former graduate of the JKA Instructors Course, Isaka sensei has devised a method of training which can only be descibed as unique. I remember being very surprised some years ago when I heard that he still competed at the JKA Championships at the age of 54. That tells you a lot about his technical ability as the JKA tournaments have always been of the very highest standards. It’s fair to say that they (JKA) actually set the standards from their first tournament in 1957.

We had an overwhelming response to the interview in the last issue with Koyama sensei. Many readers sent emails and letters saying how much they had enjoyed the interview. For me, this was brilliant because it was not a ‘technical’ interview in any way but rather Koyama sensei focused on the philosophical aspects of the art and how it interacts with our normal everyday life. It was pleasing to know how much this interested readers.

A lot of people asked about some of the photo’s which accompanied the article, especially the one with the medicine ball and the shiko dachi (stance). So we decided to ask Koyama sensei about this as you will see in the ‘Letters’ pages. The questions were put to Koyama sensei by his student, Mike Pietrobono and we have to thank Mike for all his help and of course to thank Koyama Sensei as well.

I liked Paul Herbert’s article even though he is quite critical of so called 3K’s Shotokan and in his opinion its lack of reality, especially regarding distance. Personally I don’t go along with Paul’s theories because from what I’ve experienced over the years, a ‘good’ karate-ka will always find the right distance be it a dojo kumite drill, a competition or a real situation and we all know that action beats reaction every time, it’s common knowledge! However, we decided to ask Paul (also in ‘Letters’) why he bothers wearing a gi, dojo training etc, if his main focus is on real life street violence and preparing to deal with this, which he explains very clearly in his article. We had a fantastic interview some years ago with Ronnie Christopher, one of the best ever fighters in European and World Kumite competition. Ronnie stressed that being effective is not about style or training methods but all down to the ‘ability’ of the individual. He rubbished the idea that 3K’s Shotokan was not effective in reality and this from a karateka who worked the doors and had first hand experience of reality!!

To me it’s about ‘levels of ability’ in anything you wish to name, be it karate, golf, tennis, learning a language, playing an instrument or whatever. There will be effective Shotokan practitioners and none efffective. There will be effective students of MMA or street self-defence and poor students. For example: you can get someone training solely 3K’s Shotokan and someone training strictly street scenario self-defence. Now, if the 3K’s guy’s level of ability is far superior to the street defence guy’s level, who would you put your money on in a real confrontation?

Scott Langley’s article is interesting, if you’ve not tried these ideas, give it a go, you may be surprised by the results.

“Breathe in as you prepare – breathe out when you execute the technique”… I can still remember my original instructor getting me to focus on this primitive, intrinsic concept of breathing. As a beginner I found, as I am sure most of the readers did, it difficult to coordinate and develop control over one’s breathing whilst training. However, over the years, this (like many other aspects of karate) became engrained – second nature – to the point where I didn’t really think about it anymore. Isn’t that the point of karate? Practise something until it becomes a natural movement?

However, recently I have been revaluing a few ideas… There are lots of things that I did as a beginner that I no longer do now. They were very basic, rudimentary principles that remain important, but have often been superseded by more intricate or sophisticated principles. A good example is when I first learnt Kihon, I learnt unsoku – foot movement. When moving forward or backward in zenkutsu dachi, I was instructed to bring my feet together at the half-way point. Now, of course, I just move directly, in a straight line. Whilst still using my inner thigh muscles to maintain tension within my stance that the basic lessons taught me, I have made the movement more efficient. I would not have been able to do this if I hadn’t practised the basic position, however, once it has been internalised, I moved on. So why isn’t breathing any different? What are the more advanced methods that I should be using?

At this point, it may be worth pointing out that most of what I am going to highlight in this article, the vast majority of senior karateka will do naturally. However, this may be done mindlessly – that is without conscious thought. I believe that we must always be able to understand and fully control our actions and movements in order to master them. Therefore, doing something naturally, without previous thought or control, limits one’s ability to progress. Furthermore, some people may not be doing what I am about to focus on. These people need to be taught it… It is very difficult to teach something you have never actually spent any time thinking about. Furthermore, the people who are not doing this need a simple way to produce relaxed, fluid movements. I teach professionally all over the world and wherever I go I can see this stiff and rigid karate… Having the tools to prevent this is vital to improve your karate!

Let us start with the basic gyaku tsuki from a stationary zenkutsu dachi, try it and think about when you breathe in and when do you start your exhale… Most people I have asked this question to breathe in and then start the exhale as they start the punch. However, try this; slowly start an out-breath just before the punch, then allow this to smoothly lead to a fast exhalation as you punch gyaku tsuki. I hope, if you try it, you will immediately see a more fluid start to your punch. The act of starting your out-breath before your technique primes your body for action, producing a natural, relaxed start of the technique. Whereas, breathing in then starting your punch as you start to breathe out results in a slight tension which inhibits the start of the technique, reducing fluidity.

Next, try stepping forward gedan bari from shizentai. Most people I have asked say they breathe in as they prepare and then out as they execute the block. However, if we think about the block preparation it is all about contracting the chest, pulling the blocking arm up and in… not really conducive to breathing in! So try this; preface your movement again with the start of the out-breath, then as you prepare exhale rapidly and continue to do so as you make the block. Of course the breath will follow the tempo of the movement and you shouldn’t try to rapidly breathe out for the entire movement. Instead allow the movement to dictate tempo, but make sure you never stop the out breath and this will produce a smoother, faster technique.

Of course, with the previous two examples, the techniques naturally produce an out breath. However, this isn’t always the case. For example, with soto uke, whether stepping forward from shizentai or making a full step from zenkutsu dachi, the expansion of the chest during preparation naturally lends itself to the basic method of inhalation on preparation and exhalation on the execution of the block… The point being, what I have described above is simply further tools that can be used on a case-by-case basis when training.

The next exercise I would like you to try is punching choku tsuki ten times in fast succession… Not too rapidly that you don’t breathe at all. Not too slowly that it is possible to breathe in completely between each punch.

Some people will do this naturally, others won’t. However, what you should be aiming for is; breathe out whilst punching, then the very act of making kime and relaxing afterwards, makes you draw breath in. Kime should create an instant of total body tension, however, instantly you relax, releasing the abdomen, which should allow air back into your lungs replenishing some of the air you used to punch. The result is that you should be able to punch ten times and not feel out of breath afterwards, but yet you haven’t consciously thought about taking an in-breath.

Until now, we have talked about how to make kime on an out-breath, however should this always be the case? How about making kime on an in-breath? This may seem strange, however, if we allow our techniques to somewhat dictate our breath it becomes logical. Try making a short range yoko empi, not one where you are sliding into kida dachi, but close quarter, maybe to a target standing next to you. From a Yoi, relaxed position, it feels so natural to make a sharp in-breath as you execute the technique. Or how about nagashi uke? We use it so much not only in kumite, but also kata. To make an in-breath as you draw your opponent’s attack towards and then past you, then to exhale on the counter helps to produce a more fluid, relaxed and effective technique.

However, mastering different breathing methods is only half the story. Like karate, not only must we learn techniques, we must also train our body physically to be able to do them. Breathing is no different. Recently, I climbed along the Inca Trail in Peru, eventually making it to Machu Picchu. I was above 3,500m for a week, reaching a height of 4200m on one peak. I suffered badly from altitude sickness and it took considerable effort to suck in enough oxygen in every breath to keep my body (and mind!) from going. I found myself focusing entirely on my diaphragm, drawing it down to breathe from the tanden. It worked and I made it. However, it was an important lesson for me to strengthen my respiratory muscles.

Since my return I have taken occasionally to training in a gas mask – you may laugh, however, it helps. The gas mask restricts the speed at which breath can be sucked in; therefore, every gulp of air takes great effort. If you have one lying around at the back of your air-raid shelter, try doing a kata or some kihon at speed to see the instant effects it has… However, over time it gets easier as your diaphragm gets stronger!

On conclusion, once you have these concepts in mind, it is possible to apply the breathing methods and training to combinations. Many people rush combinations, others produce jerky, stilted movements. However, I believe that if you breathe correctly, master the different ways to breathe and then apply them naturally in a case-by-case manner, then your karate can become much more fluid, produce a faster more relaxed start, become less stiff and tense and ultimately produce far more effective and powerful techniques.