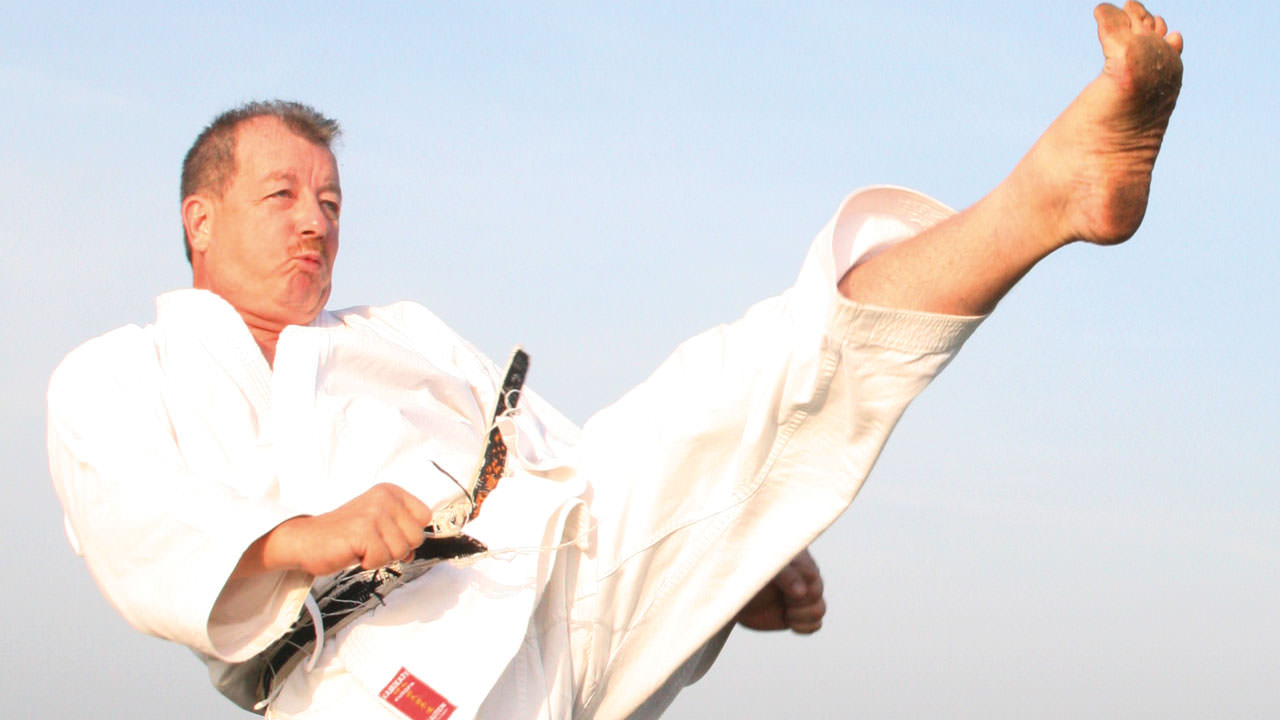 The interview with Rick Jorgensen is very interesting and clears up many wrong ideas people have had about why Karate never became or probably will never become an Olympic Sport. For me personally I'm more than happy about this but it's still an interesting point. The problem lay with the conflict between WUKO (now WKF) and ITKF under the leadership of the late Nishiyama sensei.

However, it was not only a 'political' problem – but as sensei Jorgensen explains, it was more to do with the philosophical differences between WUKO and ITKF (who represent Traditional karate-do) and also the rules of competition. Rick Jorgensen has taken over as the Chairman of ITKF and he intends to carry on with the philosophy and teachings of Nishiyama sensei. Of course, many Shotokan organisations even though they follow a traditional line in training and philosophy, do actually compete under WKF rules, it's a matter of choice as far as I can see, although many groups still adhere to the 'shobu ippon' competition rules, of which Nishiyama sensei sanctioned and preferred. This was one of the stumbling blocks with WUKO. Anyway, you will read what Rick explains and make your own conclusions. But I have to say that Rick Jorgensen knows exactly the in's and out's of what went on, 'warts an all'. It's a good read!

We have the second part of the Yoshitaka Funakoshi story, carrying on from the last issue of SKM. This is a fascinating tale by Graham Noble. Graham Noble has done a fantastic job with this story and the rare photo's of Yoshitaka in both this edition and last issue prove what an excellent technician he was. Personally I believe he was a very important influence on the early development of Shotokan. The difference between his father's karate (Gichin Funakoshi) and Yoshitaka's, is black and white! What we practice today owes a lot to what went on in the old Shotokan dojo in the early 1940's under the instruction and ideas of Yoshitaka. However, the JKA equally have had a massive post War influence. It's all part of Shotokan's very diverse and colourful history.

Unfortunately there is no old movie film of Yoshitaka, although there is a Youtube clip claiming it's Yoshitaka performing Heian Godan, I can tell you for an absolute certainty that is NOT Yoshitaka. This guy has a completely different body shape and also his version of Heian Godan differs greatly from Yoshitaka's, just look at the photo's in this issue of a sequence from Yoshitaka's performance of Heian Godan, the stance and blocks are very different from Mr Youtube's. Whoever posted that clip on Youtube has got to be joking! Get it off there please it's not Yoshitaka Funakoshi.

We had a lot of letters and comments about my article on Mae Geri in issue 109 and it seems like we have kicked off another technical debate in SKM.

As a karate-ka failure must always be seen as a part of the journey. It is something you will meet on your chosen path. You will learn from your failure and move ever closer to your goal. To continue to grow as a person and a karate-ka you must accept failure as part of the growing process.

As instructors and coaches it is important that we understand what can lead to this closed mindset, where failure must be avoided at all cost. We must understand the process that can help lead our students and ourselves to have growth mindsets where failure is just another stop on the road in the journey. As soon as failure is no longer seen as a humiliation to be avoided at all costs, you can take part and enjoy activities that will see you take great leaps forward in both your technique and understanding of karate.

A growth mindset karate-ka is one willing to take risks and except challenges. A closed mindset karate-ka is one who doesn't want to do anything that could result in failure. Sometimes the smallest and most insignificant comment to a student can result in a closed mindset. The most common error whilst instructing is praising preserved talent. This error could be something as simple as telling a student who is performing well that their karate, kata or kumite is good. The instructor will obviously be praising the preserved talent as encouragement for the student. With the thinking that if the student knows that you appreciate what you are seeing that this will motivate the student more. Unfortunately this is not what will happen, the praising of talent will cause the student to fear taking risks that could put them in a bad light. The student will come to believe that some natural talent that they possess has taken them so far but to risk losing face is too much to bear. I am sure that we have all had a student come into the dojo that seemed to take to karate very easily; they show natural timing and almost immediate good posture. They pick the kata up straight away and look the part during kumite. They start shooting though the grades with ease and as soon as they enter competitions they are relatively successful almost immediately. Everybody including the instructors tells them how great their karate is, you think 'wow I have a star for the future' and then they disappear. Further following up on the lost student will often reveal that they had shown great progress and promise like this in previous activities. These students have been given a closed mindset.

So what do you say to encourage your student? Well instead of praising preserved talent, praise effort. Show your students that you value working hard and trying your best as the most important thing they can do (which it is!). A ground-breaking study by Carol Dweck, a professor at Stanford University and one of the most influential psychologists of modern times shows the incredible affect even the most innocuous comment can have on our mindset. Dweck and a fellow researcher took 400 students between the ages of eleven and twelve. The students were given a test that consisted of fairly easy puzzles. Following the test the students were given the results plus a single six-word sentence of praise. Half the group were praised for their intelligence, "You must be smart at this", and half praised for their effort, "You must have worked really hard".

The next stage of the study saw the group all given a much harder test. None of the students did well, but the two groups responded very differently to the situation. The 'praised for intelligence' group spent very little time trying to solve the problems and gave up easily. When asked how they found it most said that they had not enjoyed it it. The 'praised for effort' group responded by getting stuck into the puzzles and trying different strategies and spending time trying to come up with the answers. When asked how they had found it, most said that they had enjoyed the challenge.

In the final stage of the study the students were given a test at around the same level as the initial test. The 'praised for effort' group increased their scores by an average of 30 percent, whilst the 'praised for ability' group scores dropped by an average of 20 percent. All this because of six words! Dweck was so surprised by the results that the test was repeated a further five times in different schools all with the same results. As part of Dweck's conclusion she wrote, "We are exquisitely attuned to messages telling us what is valued. I think we go around all the time looking, trying to understand, 'who am I in this setting? Who am I in this framework?' So that when a clear message comes, it can send a spark."

Whilst competing I have felt the pressure brought on by the wrong thing being said to me. I can clearly remember warming up at a National Championship and a coach of mine coming over to me and saying, "I don't know why everybody else has bothered turning up today you're going to win this easily." Now my coach obviously told me this as encouragement and motivation but all I felt was a whole heap of pressure landing on my shoulders. I remember thinking, "Can I live up to this?" I felt in a no win situation. If I did win, so what? That's what I should be doing anyway. If I lost I was letting my coach, my supporters and myself down. If this comment had come from a general friend or just somebody at the event the impact would not have been so great, but as it came from a coach I respected the pressure seemed overwhelming. To combat this I had to reset my whole thinking on the day and convince myself that the event wasn't important (even though it was!) and I was free to enjoy my day with no pressure. This change of attitude worked and I did manage to win the event, but then perhaps the coach went away believing his comments had inspired me rather then potentially stifling me.

A very good friend of mine has recently taken over a role as a national karate coach. This talent rich team had been performing poorly but almost immediately there was a massive improvement in their results. When I asked my friend what he was doing differently to cause such a fast change in their results, he told me the only thing he had done differently so far was to tell his fighters to feel free when competing, to enjoy themselves and to have no fear of failure. The difference this change in attitude made was staggering. The fighter's mindset had been changed and they no longer lived in fear of throwing the wrong techniques and losing the bout. They fought with confidence, not dread of doing the wrong thing.

Dweck's study shows how easy it is to create a closed mindset. Her work, along with others in this field like it, have helped the world's top coaches in many different disciplines develop athletes and competitors whose minds are open to learning and free from the restraints of fearing failure.

Matt Price 5th Dan has been training in karate for 29 years. He is a former KUGB Grand Champion, and a European and World Kumite Champion. He is a full time instructor and can be contracted by Telephone on 01423-549618 or at This email address is being protected from spambots. You need JavaScript enabled to view it.