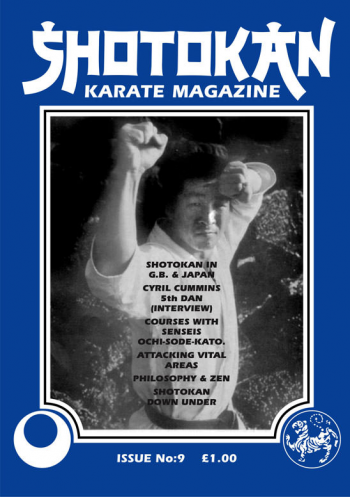 I can only judge the response to the new size A4 SKM by the sales of the magazine and by the letters I receive form Shotokan readers. The last issue has completely sold-out and virtually every club who I supply with magazines have written saying how much they like the new style and as you will see by the Letters page, Shotokan people like to let you know how they feel. I'm happy to say that only a few preferred the old A5 size of the first seven issues but it hasn't stopped them from ordering the future copies. I think the smaller size made it feel more 'specialised' which of course it is. In fact, I believe that Shotokan Karate Magazine is the only ALL SHOTOKAN magazine in the world. I don't think I'll have it printed in Russian just yet though.

We have a varied choice of articles in this issue but one all of you should read is Dave Hooper's story. Like it or not, the Shotokan karate practiced in this country came from Japanese instructors from the JKA and Dave feels that there is a 'Widening Gulf' in the Shotokan practiced in G.B. and the Shotokan still being practiced in Japan.