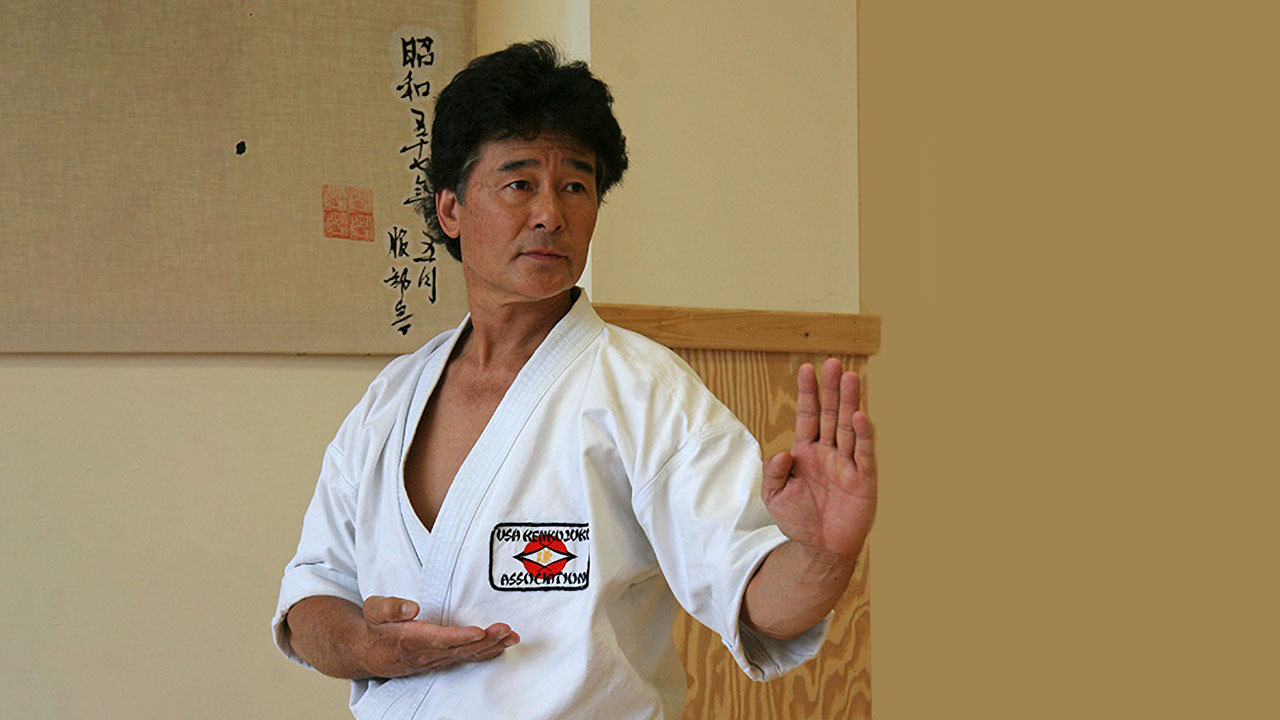 The train from NYC runs past Rockefeller mansion and Sleepy Hollow an hour north to small town Mt. Kisco. It’s a ride many karate-ka are familiar with; they’ve traveled here for over forty years to train with Takahashi Masakazu Sensei, 8th dan Kenkojuku Shotokan (Photo above). This traditional dojo still thrives and many of his original students still train, now with their children, or grandchildren. This is the honbu dojo for the American Kenkojuku Karate Association and part of the International Kenkojuku Karate Association. Takahashi Sensei continues to train and teach, personally instructing usually twenty classes a week here and at his Amityville, NY dojo.

Kenkojuku, sometimes known as Okano-ha Shotokan karate, traces its lineage directly to Funakoshi Sensei, who gave his student Tomasaburo Okano approval to open a Shotokan dojo in the suburbs of Tokyo after the war in 1942. Funakoshi Sensei visited this dojo but it was his son, Yoshitaka, who spent more time there with his friend Okano. This younger Funakoshi was renown as a fierce fighter with impeccable form and said to have introduced the fudō-dachi to Shotokan training. This may be why one sees the stance used more often in Kenkojuku than in the JKA version of Shotokan. The novice student may think there is only one “correct” form to each kata but studying the history of Shotokan and its fracture after Funakoshi’s death in 1957 reveals many valid branches of Shotokan. Though quite large, the Japan Karate Association (established in 1949) isn’t the only traditional Shotokan karate organization. Most Kenkojuku or Okano-ha kata have only minor differences from the modern JKA versions but some, such as Nijushi and Chinte, are quite distinct and may be considered older versions, passed down before the JKA revisions started with Nakayama Sensei. The study of different versions can help explain confusing bunkai more readily. For example, the opening gedan kneeling block of JKA Empi is more clearly seen as a throw in the Kenkojuko version that ends in the same position. Perhaps the biggest difference between Kenkojuku and today’s JKA Shotokan is in weapons training: Kenkojuku continues to train bo, sai, nunchaku and tonfa. There are videos and photos of both Funakoshi sensei senior and junior using weapons and this was considered an integral part of Okinawan Te practice so it shouldn’t be seen as something remote from Shotokan karate.

It was in this traditional dojo in Hachioji, Japan, that Takahashi Sensei began training with Okano over 55 years ago. Training was rigorous and followed the general formula of most karate schools with kihon, kata and kumite.

Kumite was done with more contact than most American schools allow these days; Sensei thinks this forced students to develop sharp attention skills and fine control. Such sharp attention is imperative when practicing weapons forms and kumite, as serious injury awaits the distracted or sloppy karate-ka. Thus, only advanced students are introduced to weapons training.

He trained there from age 15, through college and until Okano sent him to the US. Arriving in New York in 1971, he first taught at Toyotaro Miyazaki’s school in Brooklyn but soon opened his own school in Mt. Kisko. Word spread fast of this talented new teacher and he was soon able to open a second school in Amityville.

Many of today’s students began training when the dojo opened in 1974. Time takes its toll on all of us and most of those original students find themselves less limber and slower to recover from the pulls and strains they barely noticed in their twenties but it hasn’t stopped them from practicing. It follows that, if Karate is truly a “Dō” or way of life, it’s can’t be static since our bodies aren’t. We have to accept that few of us can perform at the same physical level at seventy as we did at twenty.

Adapting his karate to normal body changes over the years has deepened Takahashi sensei’s understanding of the art and improved his ability to teach. Kata training has always been central to Shotokan training. To truly benefit from its study, he feels one must find personal meaning in the movements. Kata without feeling is simply a memory exercise - calisthenics, at best - and not true karate. Each movement should be precise, understood and with intent. He understands that not everyone can perform a jodan-level kick after a hip replacement and that a lower-level kick can be more effective when properly performed, and intent remains intact.

It’s difficult to accept the limitations of age and Sensei recognizes that - he still pushes his students but not beyond what they can safely do. Each class includes a warm-up with ample stretching and he stresses proper body mechanics. Don’t misjudge - workouts are still exhausting, but not brutal. No one should leave injured or in pain. You might get away with abusing your body when young for a while but you’ll eventually pay for it with arthritis, pain and limitations later in life.

This wider understanding of karate has allowed Takahashi sensei to expand his dojo to a wider community- there are classes for children, women’s classes, for the advanced elderly, and physically and mentally challenged as well. The key is to understand what each is truly able to accomplish and guide them to reach that potential.

Although the history of Kenkojuku Shotokan is interesting, it’s my hope that the reader of this article takes away this key point - karate can be just as fun, exciting, useful, deadly, and everything else that makes you love it for your entire life; don’t be discouraged by the limitations your body presents as you age but adapt your karate to it and never stop practicing - endeavor!