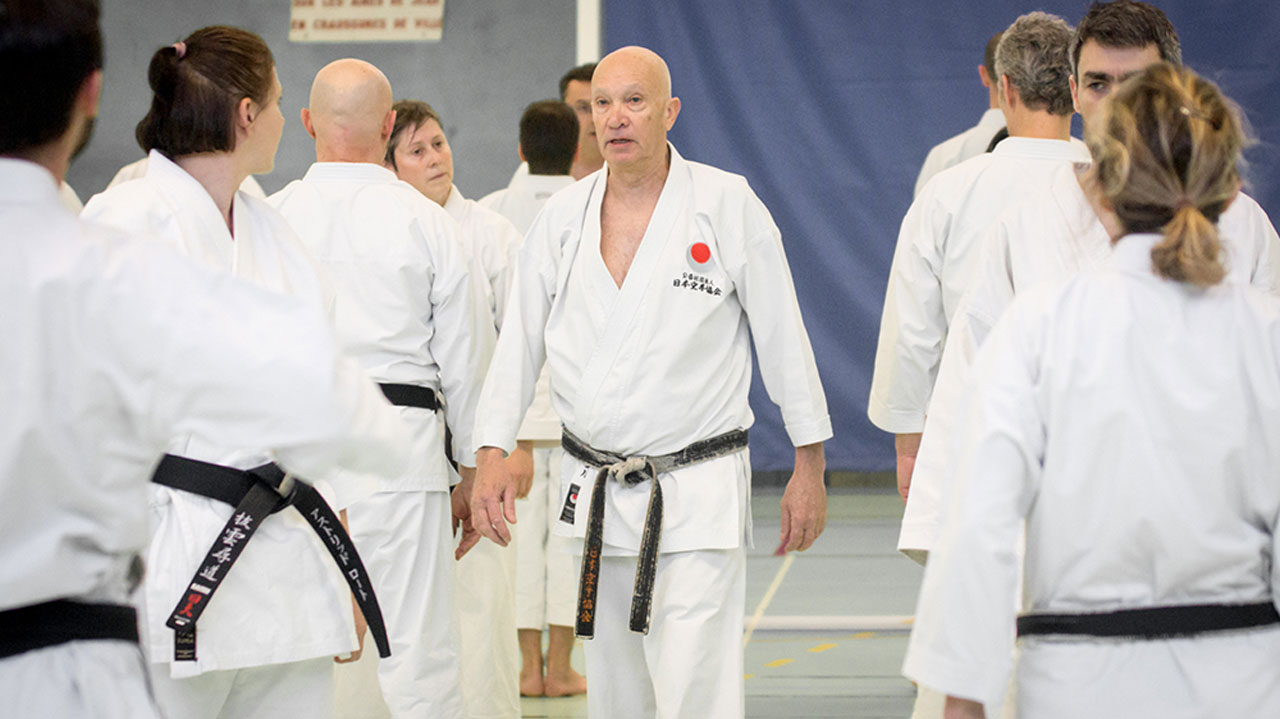 Shihan Daniel Lautier, 7th dan JKA and FFK, chief instructor of France JKA from 1985 to 2015. Currently head instructor of JKA MADAGASCAR, since 1989 and technical advisor of the JKA MARTINIQUE Academy since 2018. I started karate in Paris on March 21, 1965, so I have been practicing karate-do for 55 years. I started teaching in September 1969. I am a professional karateka since 1979. I had as teachers: Senseis DE PERETTI, KASE, MIYAZAKI.

What kind of child were you?

I was not very wise, preferring to play rather than go to school. I liked being outside, I played football (goalkeeper or goal only), petanque (pointer but not shooter). On the other hand, I was meticulous about certain things, such as making mock-ups of planes and boats. I made many mistakes. I liked to tease people, even now!

You were born in Morocco, and lived in Madagascar, did this journey influence your life? And in what way?

Born in Morocco in 1950, I left for Madagascar in 1954 until 1960. Madagascar has marked me more than Morocco. These journeys have opened me to the world and to the ever enriching encounters in an extraordinary country both on the landscape and on the human level.

Can you describe when and under what circumstances you started Karate?

Still not interested in school, my father told me I had to work. So I found a place as an apprentice in the telephone on March 21, 1965. That same day, having found a poster promoting karate with Mr DE PERETTI on the 14th, the evening came and I introduced myself to his dojo.

It was the beginning of Karate in France, and you were a teenager, it must not have been easy?

At that time, there were no children, no women or very few, and few teenagers with me in this dojo. The training with the adults as well as the classes were very hard, 3 days a week. The return home, late in the evening, was difficult (2h of transport between metro, walk and train).

What was the atmosphere at the dojo at that time?

There were many practitioners, many elders, but very few exchanges between teenagers and adults. Over time, the students, all “old” to me, took me under their thumb and took care of me.

What was your relationship with your teacher, Mr DE PERETTI? With the elders of the dojo?

MR DE PERETTI was very strict, there was almost no communication. There were very few exchanges between the practitioners, especially since I was a teenager. The adults were mainly grads in Judo and Aikido and who started karate. Despite the severity of Mr DE PERETTI, I felt that he was benevolent towards me.

Sensei, regarding your first trip to Japan, what made you decide to go there?

Mr DE PERETTI having informed me that he was going to Japan to discover Japanese karate, I asked him if I could accompany him. He accepted with pleasure. I was always ready to discover new horizons.

Can you describe this first stay?

This stay was very difficult, already for the language, because I did not speak Japanese or English. I made very few visits except Tokyo, my days were spent from Monday to Friday from my apartment to the dojo (1 hour of transport by metro) for 4 to 6 hours of lessons per day. The weekend was all about recovering from the week.

Has the reputation of the instructors of the time, present in the dojo of the JKA, changed?

The instructor courses that we were fortunate to see were very harsh and violent, even extremely violent. This was part of their training. Our courses were also very difficult, it has changed a lot since then.

Which instructors, present during your first stays in Japan, influenced you the most?

When you return to France, you start teaching Karate, and becoming a professional, was it obvious to you?

When I returned to France in 1969, I wanted to be professional knowing that it would not be easy. I opened my first dojo at FOSSES, then in 1973 at Saint Prix, in 1974 at Survilliers, in 1978 at Vaudreuil and in 1979 at Paris 11th. I was then working in an American telephone company that I left in 1979 and opened the Senlis club. I did not see myself doing anything other than teaching karate JKA, in order to make many enriching encounters.

How did your parents react to this decision?

My parents were very surprised by this choice, especially my father who did not agree. Mom supported me, morally and financially sometimes.

You followed for a few years Taiji KASE Sensei, who represented the JKA in France, can you tell us about this time?

After my return from Japan, it was an important meeting for me. I started with private lessons and then group lessons in Paris. The classes were very hard, a bit like in Japan. I participated to the maximum in all the internships of Sensei KASE in France, England, Italy and Belgium.

What memories do you have of him?

He was an open man for the evolution of karate, while remaining traditional. He brought, especially in Europe, a new vision into practice. To me, he was a genius.

Sensei, can you describe for us the circumstances under which you met Satoshi MIYAZAKI Sensei, and why you chose to follow him?

Sensei MIYAZAKI was a very human person, I had the chance to be very close with him. He was my sensei, my friend and then like my father. He opened me up to the things of life. I sometimes slept at his place in Brussels after the class and the restaurant. I traveled a lot with him: Canada, Australia, USA, Japan. He made me discover Japan outside of martial arts. It opened my mind. I followed him from 1978 until May 31, 1993, when he died.

You have always been faithful to JKA, what does this organisation mean to you?

I have known JKA since 1968. It is a great school that teaches karate-do practice in many countries where it is very popular. I was able to realise this during my travels in these countries for competitions or courses.

Since your first stay in 1968, you have returned many times to Japan, what are the souvenirs that you keep from these different visits? The best, the worst?

These are the visits of cities like NARA (where deer live in freedom in the city), NIKKO (the great waterfall of lovers), OSAKA (the castle and the different temples), KYOTO (famous for its gardens and temples), KOBE where I made several stays and where I trained at Sensei SUGANO (Sensei Kasé had made me a letter of recommendation to access his courses; I even had the chance to stay with him), GIFU (the Onsen baths that Sensei NODA and Sensei MIYAZAKI made me discover), KAMAKURA (the great Daibutsu and in April the cherry blossoms Sakura), KITA-KAMAKURA where there is the stele of FUNAKOSHI then Mount FUJI. At that time many people were in traditional clothes, now it’s very rare and it’s a shame. All these visits, for me were very important to discover the country, the inhabitants and the different customs. I regret not having had the time and opportunity to see HIROSHIMA and NAGASAKI, perhaps one day! One evening in 1968, thanks to karate, I also had the opportunity to dine with the writer Yukio Mishima of his real name Kimitake Hiraoka, 2 years later, he gave himself death, seppuku (hara-kiri).

You have worked with many JKA instructors, which ones have impressed you the most?

In January 1991, I was able to participate in the 1st SHIHAN KAI in Gifu with the then new chief instructor of the JKA, Sensei Motokuni SUGIURA, former student of Master FUNAKOSHI. I was very impressed by his very simple teaching, the revision of the 15 kata of the Shotokan school with some modifications to return to the traditional form of Funakoshi. In 2001, he had his 15 kata books published. Other instructors who impressed me are: Sensei TANAKA whose classes were very physical..., Senseis NISHIYAMA and OSAKA were very pedagogical and technical. Sensei UEKI now chief instructor of the JKA seemed to be very cold, but knew how to pass his instructions and especially on the geri.

Do you have more personal “privileged” contacts with some of these instructors?

Yes, with Senseis TANAKA, OSAKA, NAKA, MIYAZAKI, MORI and UEKI, after the different courses, the conversations were going well at the restaurant and at the hotel. Sometimes I would receive them at home, to meet my loved ones and also to show them how we live in the West.

Sensei, for more than 45 years, you have worked for the development of Karate JKA, would you say that this was an easy task?

It wasn’t always easy, there were ups and downs…. Like everyone’s life! In Bruce Lee’s time, many students came to the dojo to look like him. France has started to organise competitions, training courses with JKA experts (Kasé, Enoéda, Shiraï, Kanazawa....). In 1977, after the closure of Sensei Kasé’s dojo in Paris, there were only a few courses and practically more competitions. In 1985, with Hervé D. we decided to create an JKA group, FSKA. The French Karate Federation, with whom we had signed a memorandum of understanding, supported us for a few years. Students then returned to our dojos and others created new associations to be members of the JKA through the FSKA. Thanks to this, we were able to join the ESKA (European Shotokan Karate Association) as well as the ITKF (International Traditional Karate Association) and we were able to organise competitions, internships in Europe and also participate in the 1st Shoto-Cup in October 1985 in Tokyo. In 1998, I organised the World Cup (7th Shoto Cup) which was one where there were the most countries and participants (57 countries and nearly 2000 participants). In 2015, I made the decision to leave my position as Chief Instructor of France JKA (we had changed the name of the association FSKA in France JKA in 1994). In 1989, I created in Madagascar, the association MSKA which became Madagascar JKA, of which I am still the chief instructor and where I go every year. Since 1995, I go every year in Lithuania, leading internships. I also ran internships in Morocco, the country I was born in, Tunisia, Algeria, Djibouti. For 2 years, I went to Martinique and created Matinik JKA.

Do you have a message for the “new” generation of instructors?

They will not have the chance that we had to meet great Senseis close to the founder Funakoshi. They must continue to practice and transmit traditional karate as close as possible to what they have learned despite the current evolution. Discipline and Labour. 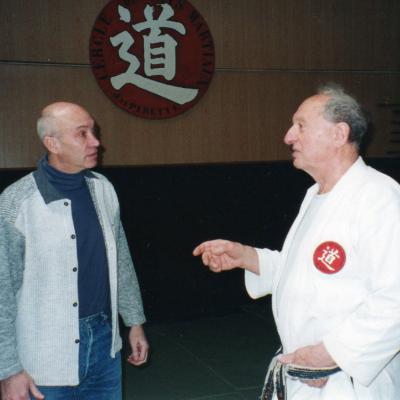 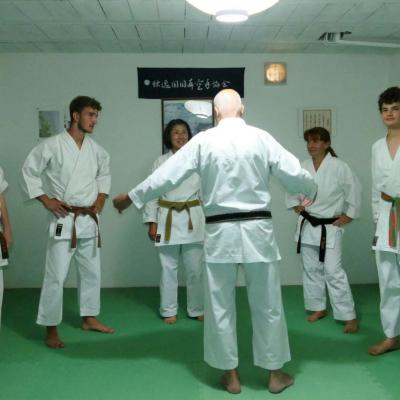 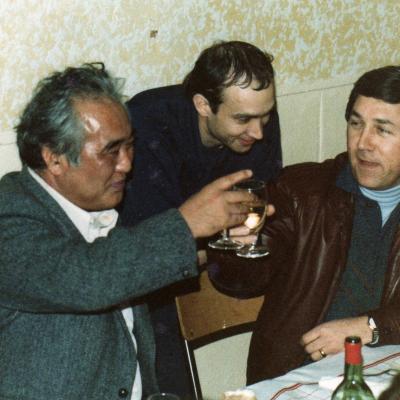 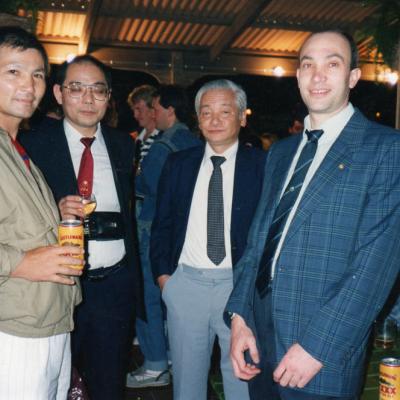 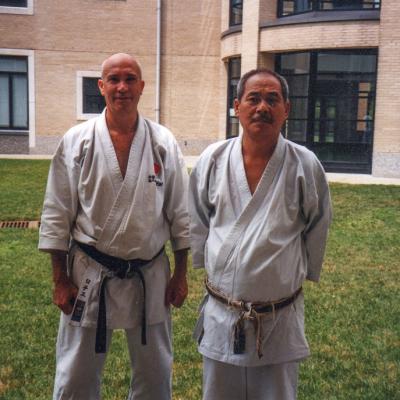 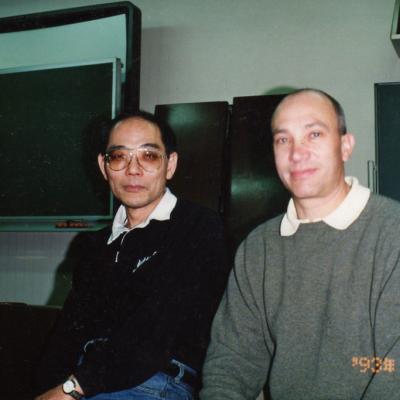 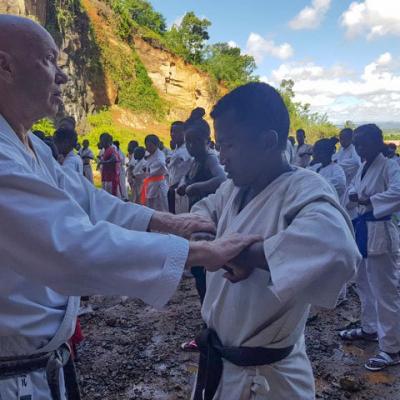 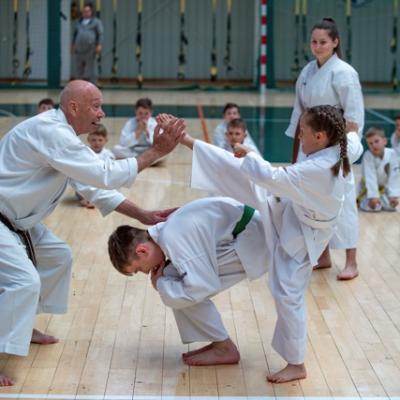 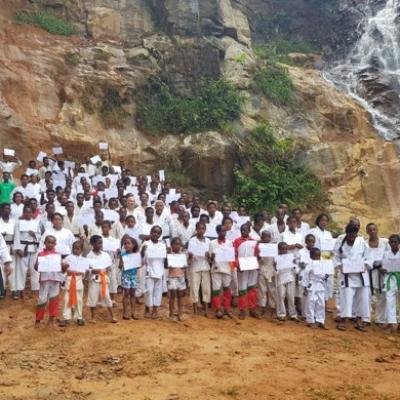 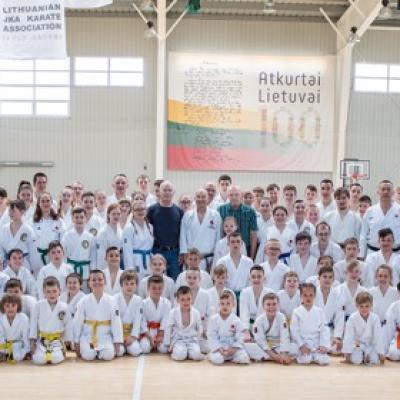 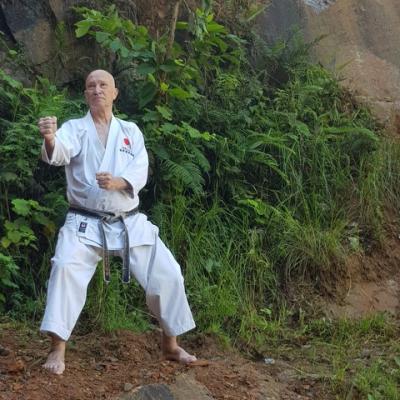 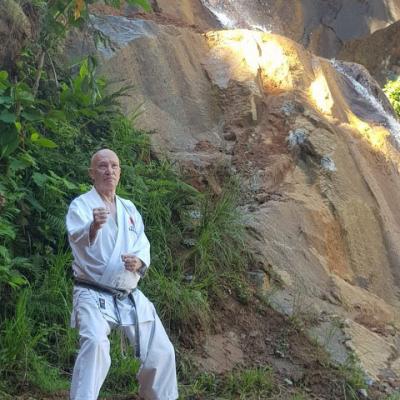