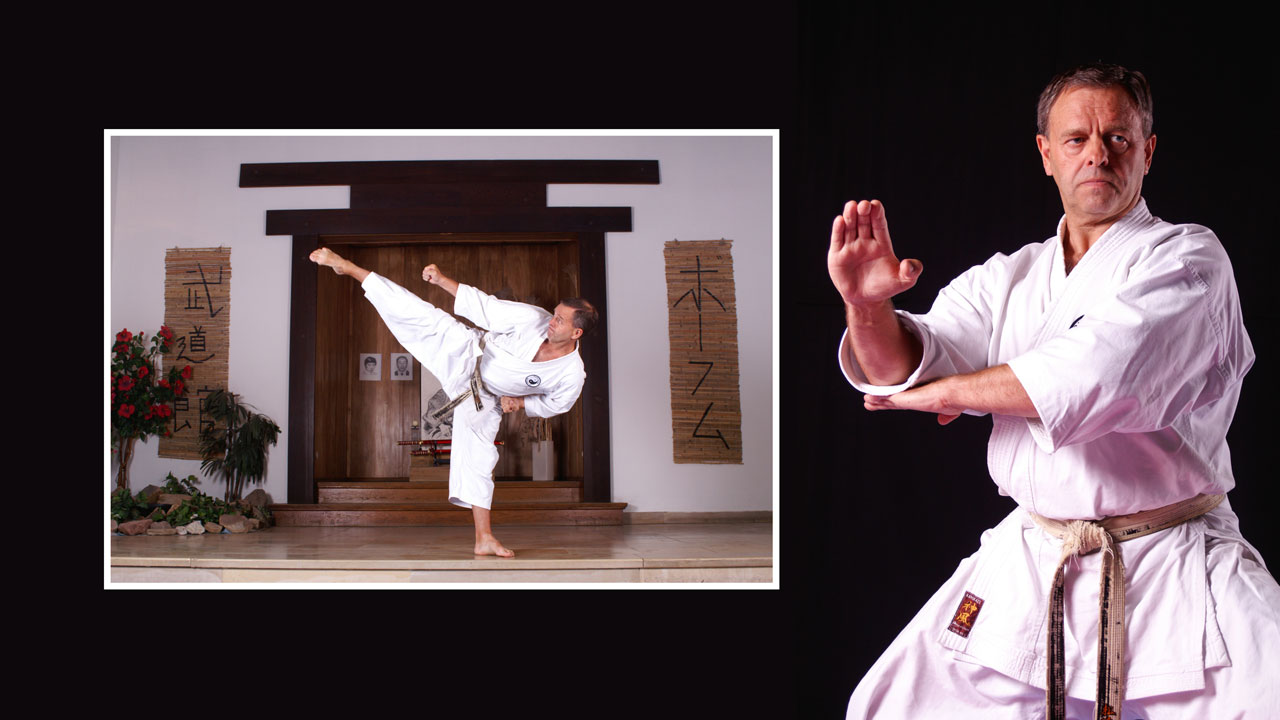 In 1968 and 1970 he graduated for his first and then second Dan under Hirokazu Kanazawa, who was the German national coach at that time. Currently, Bernhard Milner is a 9th Dan Shotokan.

He also was the first to become German Champion in Kata and Kumite Shiai in 1970 in Saarbrücken. Besides a lot of German regional and national championships, his athletic successes involve four European vice-championship titles and a third place at the 1973 World Championships in Tokyo, which was a real sensation at that time. Bernhard Milner lives in Bochum, in the heart of the Ruhr district, where he manages his own dojo, the Budokan Bochum, with his son, Tim Milner, who is also a successful Karateka.

CG: Bernhard Milner sensei, if you look back at your (Karate) life - who has had the biggest impact on you?

CG: Why did you start Karate in the first place? How did you develop personally?

BM: When I first started with Karate in 1965, the sport was completely unknown to me and was something “mystical”. That’s why I was really interested in it and I wanted what probably most of the 16-years-olds wanted and what was the normal mindset at that time: to achieve success as quickly as possible and win a championship! It was only at the end of my active career that I became involved as a trainer and coach. My numerous students were then able to achieve success at German championships where they won first, second and third places. In the European championships they ranked first and second and at the world championships third. This is the performance range I still encourage to date.

However, this is only one part of my work as a Karateka. Within the German National Association of Karate (Deutscher Karate Verband, DKV), I was the first to shed light on the health aspect of Karate practise which partly influenced me to become a naturopath. In 1999, Prof. Dr. Harald Hötzinger and me instituted the education for “health trainer” within the German National Association.

Shiatsu (the technique of Japanese pressure point massage), positive stimulation of vital points and an understanding of how to achieve and obtain a healthy lifestyle via Kihon and Kata is a different and additional branch of that. This is also the reason why I aim at developing modern means of teaching besides the traditional and interesting Karate training whenever I teach at my own dojo or at one of the many national and international courses I give in order to keep everyone’s interest in Karate and to enable them to be open towards innovation without forgetting the old values. This way, one can maintain a long and better quality of life through Karate.

CG: Unfortunately, we had to say goodbye to Kanazawa sensei in 2019. What is one of your fondest or most impressive memories in this context?

BM: Hirokazu Kanazawa was the figurehead of international Shotokan-Karate and he will always be “Mr. Shotokan”! He was always very polite and objective and his techniques were captivatingly precise and correct up to his old age.

CG: You were able to accomplish big international success under Hideo Ochi. What is one of your most impressive experiences?

BM: I was under the last eight participants in Kata-Shiai at the 1977 World Championships in Tokyo. In the final, I stepped onto the mat and announced “Sochin”. Masatoshi Nakayama, who was chief referee that day, repeated “Sochin” - as did the stadium announcer. I then performed a perfect Nijushiho - I still don’t know why.

Nakayama sensei was visibly baffled and after short hesitation he expelled and disqualified me. While I was walking off the mat, still not knowing what happened, Bob Poynton from England walked towards me and shouted, “You’ve announced the wrong Kata,” in English to me. Then, Ochi sensei walked up to me smiling and gave me a head nut. That’s how I involuntarily made way for my long-time rival and later good friend Carlo Fugazza from Italy to step onto the winners’ rostrum. Later we held a lot of courses in Germany together.

CG: Speaking of your professional career, how were you able to combine it with your Karate-life?

BM: Luckily, I only had minor problems connecting the two of them because my most active times fell together with my school and university study period. Subsequently, I have worked as a machine component designer for many years. Later, I have often asked myself whether winning competitions could have been all - Why are movements or e.g. stances the way they are in Karate? Why is it that we execute them this way and not differently and what’s the reason for us frequently finding set angles in Karate, e.g. 90 degrees?

CG: Did you have an answer for these considerations?

BM: I guess it was in 1996, in Overrath near Cologne, when I was on a seminar with Hirokazu Kanazawa and Norio Kawasoe (1951-2013, National Coach of SKI Austria), who unfortunately died too early, translated for the course participants from German into Japanese. During the seminar I noticed that Kanazawa Kancho “stimulated” certain points on his body, e.g. through light contact on Large Intestine 18 when preparing for Gedan-Barai or touching Large Intestine 10 when crossing arms for Age-Uke. I was really fascinated and in the closing Mondo I asked Kanazawa Kancho if he did that on purpose. Instead of an answer he promptly asked back: “Milner, how or why did you see that?” I replied that I had already started to study Shiatsu - Master Kanazawa then said that he had taken classes at a Tai-Chi-Master in Tokyo and that he would combine these points with Karate ever since. He went on to give me the advice, “Continue!” as this was a good and healthy way!

CG: You’ve already said that you were one of the first in the DKV to address the health factor within the sport. You promoted Shiatsu-practitioner-education within the program of the popular sport and continue to offer courses to date. What exactly is Shiatsu and where lies the connection to Karate?

BM: Shiatsu comes from Japan (even if its roots lie in China) and translates “finger pressure”. In short, Shiatsu points are points on the body which react to bioelectrical stimuli especially well and which transmit these electrical impulses as well. Far Eastern culture picture them to be intersections of special channels on which the life energy KI (Chi) flows. Western scientists have proved and mapped this network of body points via use of sensitive electrical devices. The stimulation of these points by pressure, needles or warmth triggers the distribution of endorphins, i.e. analgesic - pain relieving - neuro transmitters. Thus, pain is blocked and the supply of the affected region with blood and oxygen is improved. This causes a relaxation of the muscles and facilitates the healing process.

Through Karate and its techniques Shiatsu points can be stimulated positively so that - provided that the technique is executed correctly - one can keep the body healthy, more powerful and flexible. This way, each Kata- and Kihon-technique has a lot of positive effects on body and soul.

And of course, we should not forget about the “other” side as well: If I can stimulate a point positively I certainly can do that in a negative way on an opponent’s body too in order to gain an advantage in a fight, e.g. by an enhancement of the effect of a hit.

CG: Speaking of an improvement or enhancement of effect in Karate and Shiatsu, wouldn’t it be logical to talk about this “negative” form of vital point stimulation, namely “Kyushô jutsu”, as well? What’s your opinion on that matter?

BM: I’ve almost solemnly dealt with the positive side of vital point stimulation. It was a lot later that we also focused on points that are prone to “negative” stimulation - but in the Karatedojo Bochum we only did that with a maximum of 10 points and we tried to manipulate them. This “negative” aspect of vital point stimulation bears the advantage that in a real self-defence situation weaker people can cause a big effect with little effort. Of course, you need to practise this regularly! In the Budokan Bochum we repeatedly offer seminars with well-known international masters of Kyusho jutsu, e.g. with Zsolt Szénási from Hungary who is the Chief Instructor of the European Kyusho Academy (EKA).

CG: After all these active years training, what is your suggestion for children and young adults who first come to a Karate session today?

BM: Keep your interest in Karate as long as possible! Follow an unswerving course as Karate is a life-long journey - even though it can sometimes include some interruption or trials and tribulation!

The interview was conducted in March 2020. 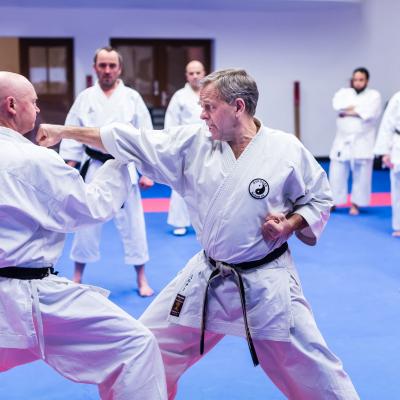 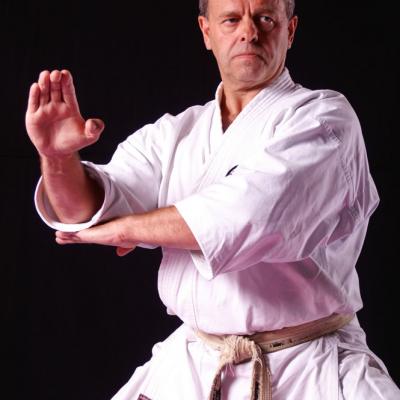 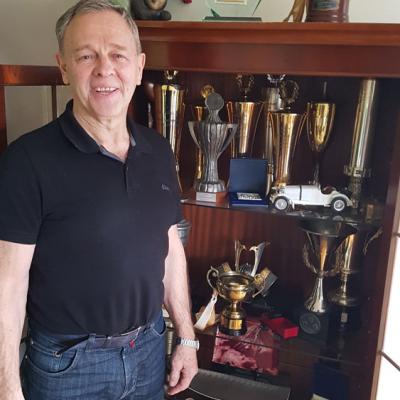 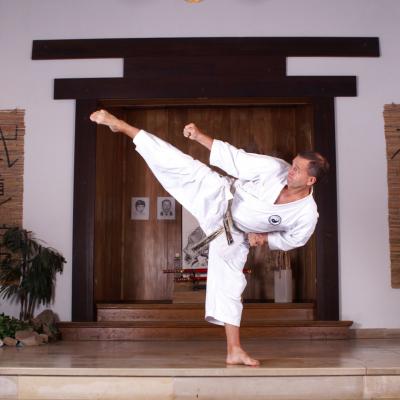 Bernhard Milner01: Bernhard Milner next to his extensive collection of trophies and medals in Bochum; at the top you can see the trophy for 3rd place in the Tokyo World Championships, 1973