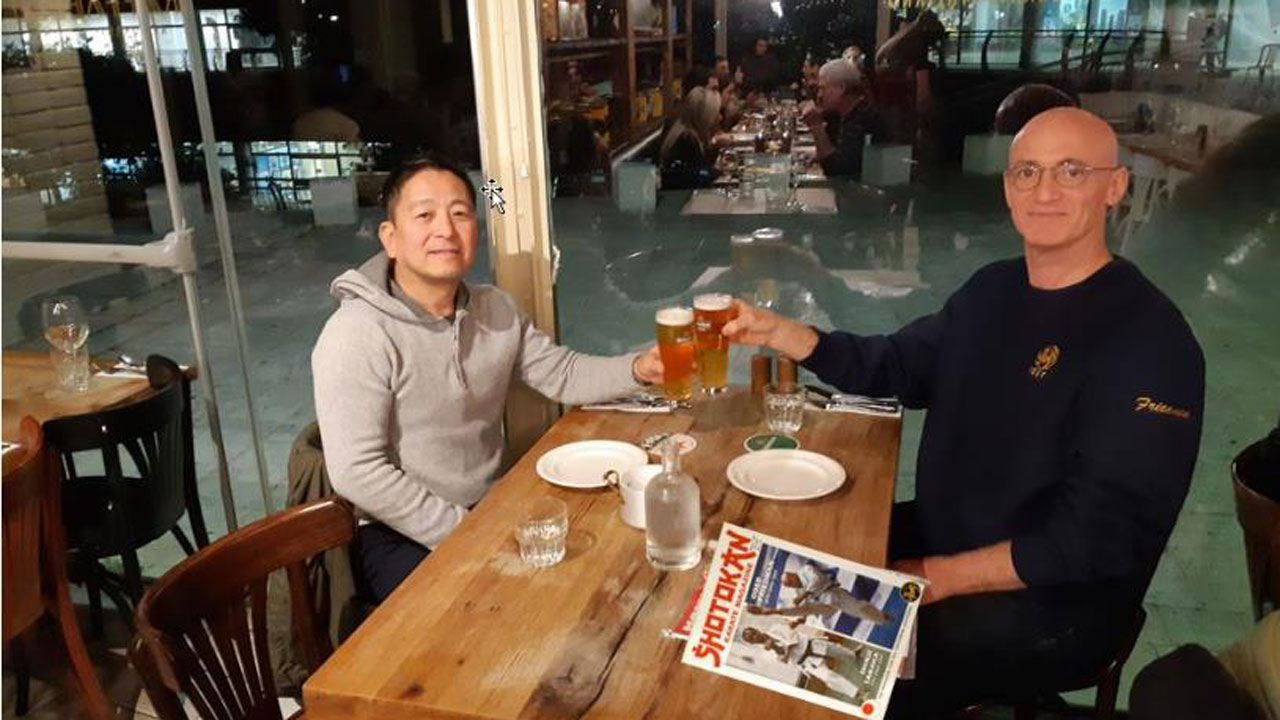 The Israeli Shotokan Association, Shotokan Ryu Israel, has been in existence for more than three decades, starting in 1986, with annual 3-4 days seminars.

The seminars are carried out by senior Shotokan members from the worldwide J.K.A and I.S.K.F, among them were karate legends, who were either students or who were trained during the time of Grand Master Funakoshi: The late Teruyuki Okazaki, who visited Israel about 10 times, Yutaka Yaguchi, Keinosuke Enoeda, Takayuki Mikami, Hideo Ochi, Yoshiharu Osaka, Shigeru Takashina, James Field and others. In these courses, senior coaches from Shotokan organizations from Israel and the world participated. During this seminar, senior coaches from Germany, Russia, Jordan and Ireland were hosted.

This last seminar (in 2019 before the covid outbreak) was carried out by Hiroyoshi Okazaki Shihan, the chairman of I.S.K.F, which was his fifth visit to Israel, and as during each of his previous visits, the seminars which were carried out by him, offer a tremendous karate experience for the participants.

Okazaki Shihan has been training for many decades. He graduated from the J.K.A/I.S.K.F Instructor Training Program in 1995. He also is a member of the esteemed I.S.K.F Technical Committee. He participated in Regional, National and World competitions for many years achieving numerous awards. In 2015 he was appointed by Grand Master Teruyuki Okazaki to take his place as the Chief Instructor of the I.S.K.F.

First, it is important to note that Sensei Okazaki is a warm-hearted man, answers questions very patiently, is humble in his demeanor, and happy to spend time with the Israeli karatekas, but it is important to observe the performance of his individual techniques to understand the power and precision behind the calm and sympathetic appearance of the Shihan.

During the instructors training sessions, very basic and fundamental issues such as moving weight from side to side, emphasizing the position of Seika Tanden (centre of gravity) and the understanding of the role of the centre of gravity, were practiced.

The Sensei and the senior coaches practiced several Kata with the trainees, giving explanations and highlights on various points such as: Jion, explaining that in the double blocking movement at the beginning of the kata, the turning of the fist is only carried out towards the end of the blocking movement, and he also emphasized the importance of the preparation movements before the Age Uke waza, (movements 12, 14, 16) for powerful blocks. In Bassai-dai, Shihan explained that the first techniques are long range blocking, but another application is preparation for body rotation and throwing the opponent down, all this while providing an explanation of the waist movement and body centre of gravity; in this regard, he also emphasized the proper execution of the Kosa dachi: The ball of the foot of the back leg is pressed against the side of the front foot for support whereby the knees are closely together, closing the body thus protecting the groin.

In the aspect of the kumite, defense and counter-defense exercises were practiced against 2 to 4 opponents, with an emphasis on evading and responding to one attacker, while avoiding maximum exposure to the other opponents through displacement and space awareness at 360 degrees.

A challenging exercise with a significant social impact, was the exercise in which the karateka lined up at one end of the hall and held a sort of competition between the columns, with each student performing kicks (with the kicking leg back) and then the same leg performing a kick & punch and thus advancing down the hall and back, and when returning, the next student leaves to perform the sequence of techniques. The students encouraged each other with cheers and some joined in and performed the exercise with their friends to stimulate them. A special and challenging experience.

Sensei made it clear and emphasized essential points in different stances, such as the front stance (zenkutsu-dachi), which indicated that when moving to a "straight" position (shomen), the muscles of the legs should be pressed inwards. He created an exercise that combined stances like Kokutsu-dachi, Sanchin-dachi and Neko-ashi-dachi and hand techniques performed in different directions. In the second stage, leg techniques were also incorporated. The exercise was excellent training for concentrating stability, practicing different stances, changing stances and by doing it, challenging unconventional combinations.

The coloured belt training, in which there was a high concentration of children, once again revealed the ability of the Sensei to communicate and treat the young students in a sensitive and special way, some of them 6 years old, who have been very seriously trained.

The Chairman of the I.S.K.F Israel Oded Friedman, in response to a question about salient points in training, noted the ability of Shihan Okazaki during senior training to get down to accurate resolutions, which greatly contributed to deepening the knowledge in the basic work. For example, in Kata Heian Nidan, movement no.16, the Gyaku technique; the structure of the front stance must be in such a way as to protect the groin.

At the end of the seminar, an exciting ceremony was held, in which the representative of the Embassy of Japan in Israel and the Deputy Mayor of Haifa were greeted. Finally, Michelle Bitton sensei, announced the results of the Dan tests that took place on the second day of the seminar.

During the ceremony Okazaki said that for him every visit to Israel is like a family visit and, with his modesty, he added that he too learns during his visits in Israel.

Sensei Friedman concludes: "The annual karate seminar is a complex challenge in human, professional, and logistical terms, but the dominant feeling is of satisfaction. The sense of satisfaction that naturally entails in the significant professional enrichment that Okazaki conveyed to the course students and the positive responses, but as a coach, I also feel gratified by the great mobilization of the association's students and even parents and spouses for the success of the seminar and of course the professional progress of the students, who took the Dan examinations".

The visit of Okazaki Shihan ended with a joint recreation at a pub. The Israeli Karateka are already looking forward to his next visit to Israel.