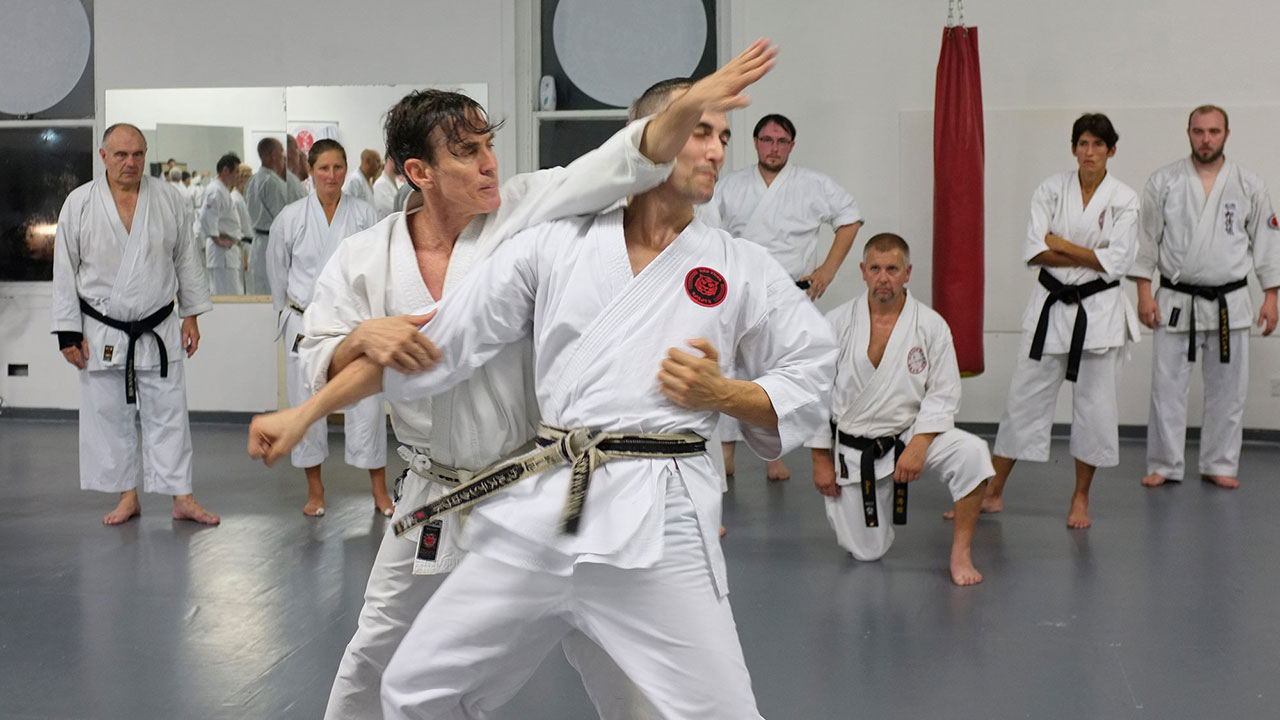 The evening of 18th September saw a small gathering of the ‘shotokan family’ converge on Red Sun Karate Dojo in Walkden, Manchester to train with Sensei Rick Hotton. The course was hosted by Colin Needham, who has known Rick for several years, through training at Rick’s, West Wind Karate Dojo in Sarasota, Florida.

The atmosphere even before the class commenced was congenial as faces were recognised from previous courses, acquaintances were renewed and everyone was eagerly anticipating the class.

Looking over the gathering of karate-ka, Rick Sensei remarked that the group were from a wide variety of backgrounds and had different motivations for training, but nonetheless were joined together with a willingness to learn, and that humbled him.

Sensei Hotton led the warm-up, talking to the class throughout and reminding us to be mindful when performing each exercise, as each stretch, position and movement was every bit a part of our karate practice. Reinforcing this by asking us to be aware of the alignment of our nose to our chin (posture), as we raised to standing from seiza.

Hip vibration with choku zuki was first practiced, initially just the movements of the hips and then after with the punch. Right from the off, sensei talked about allowing the body to be relaxed, of course not floppy, but by engaging our core and being conscious of our centre, and letting the techniques (and hikete) go through the centre of our body. Hotton sensei discussed the position of the hikete fist at the hip, telling us that many students (especially lower grades) allowed their fist to flex downwards. After we checked that our fist’s where straight, sensei then asked us to very slightly, cock our fist towards our bicep, this made our fist feel that bit more connected to arm and in turn our torso. Regarding the punching fist sensei used the analogy of squeezing peanut butter through our fingers to make a complete fist. Reminding us to be alert to each finger, starting with the compression of our little finger and concluding with the placement of the thumb.

Sensei talked about how the purpose of each movement needs to continue through the ‘ends’ of the technique, often we perform techniques flat, with little intention in the punch or block, transferring through into our opponent.

Shuto uke was then practiced, beginning in shizentai with hips rotated so we faced 45 degrees to our right, right arm bent and hand towards our left shoulder. Sensei asked us to be aware of the position of our right elbow, (keep it still, don’t allow it to move away from the side of the body) as we performed shuto uke - moving the left hip away from the right hand. Starting with a two count, 1.block, 2. preparation, then one action, building up the speed. Performing shuto uke dynamically, Hotton sensei verbalised his action with a sound, it wasn’t long before the rest of the class was expressing their uke’s with various tones! Sensei said, not to stack the arms when making the preparation for shuto uke, but to allow the uke arm to sit in the hollow of the opposite elbow. He also revealed that kokutsu dachi for him, he is slightly tilted forward from his front leg hip, although he is still ‘sat’ fully loaded on his back leg.

As we went on to practice oi zuki then mae geri, sensei advised us not to focus on the end of our techniques (‘our extremities’ arm/hands and leg/foot), but we should concentrate on our core movement, from initiation through to performing the techniques to generate the power. Throughout the lesson as we all ‘tried’ to put into practice Rick sensei’s teachings, we became a bit tense, sensei constantly prompted us to give up on the ‘trying’, just relax and do. He talked to us about when we begin learning karate, we are only concerned with the outside form of the technique (making shapes) and as we progress, we need to contract and expand the body, internalise the principles of the techniques, feeling the movements, not forcing them and allow the our bodies to resonate, to breathe.

He encouraged us all to steal ideas from our teachers, as decades of practice have allowed each of them to discover different things and we should draw on their knowledge to assist and aid our own karate practice.

Partner work ensued. The first drill was moving off the line of an oi zuki attack with gedan barai, loading up ‘deep’ the back leg, using this compression to drive our body, initially to push the opponent. We then replaced the push with gyakuzuki, practice was done in this order so we capitalised on the potential energy of the body action and not just a gesture with our arm, to perform a devastating blow.

Moving on, Sensei pointed out that often when we are grabbed we tense up, thus giving our attacker more sense, feedback of ourself to them. With our partner grabbing our hand, we were asked to first tense up when grabbed so we could feel this connection we transmitted between one another. Then next, relax when being grabbed, this gave our partner no kinaesthesia of us. Using this relaxed state of being, we continued this practice by offering our right ‘relaxed’ hand to be grabbed, then taking it away, not just by pulling the arm away, but stepping back - moving the body, and in turn, the arm away from the opponent. The opponent was thus drawn into our space, so using our left side (with forward feeling), allow our left arm to cut diagonally across our opponent’s face, thus turning their head and breaking their balance and causing them to fall to the ground. The left arm movement didn’t require any power, just allow the energy to continue to move forward through our partner’s centre line. Sensei also demonstrated at this point how to fall to the ground, and more importantly, how to get back up with efficiency. As his balance was broken, he showed that his position was very much like performing the limbo (bending backwards under an ever lowering horizontal bar). The stiffer you are in your back, the sooner you need to go on to your toes, allowing your bottom to get as close to the floor as possible before you ‘sit’ down on the floor and roll backwards (let your legs come backwards), as you roll forwards, bend, tuck one leg in and use this to allow you to get to your feet without using your hands.

Another partner exercise practiced had us both left leg forward with oi zuki chudan as the attack. Rick sensei illustrated by expanding his body, thereby offering a larger target to encourage the attack, just before contact of the punch he collapsed (relaxed) his body, taking the target away and through his relaxation moved just off the line of the attack.

The next exercise, with the oi zuki chudan attack, sensei reminded the defender to always feel like going in, he said you don’t want to be reactive to an attack or tense up, as the shoulders will rise and they need to be down, movement needs to come from the centre. Also, even if we step back to an attack, we should be already going in and onto our opponent. He talked about his understanding of the concept, ‘it’s over before it’s started’. In this vein, sensei asked us not to be concerned about the attack, but with a relaxed psyche and equally relaxed body, as we perceive the attack, to go forward into the attack and touch our partner’s forehead, again turning his head and breaking his balance. We realised through practicing that if we weren’t relaxed to the attack, or if we stopped the forward projection of our energy on contact with our opponent, then it was just a collision and not an effortless take down. I have to give mention to my main training partner, Bernard Rose, who allowed me to ‘practice’ the drills on/with him and thank him for his patience.

This feeling of ‘moving through’ our opponent was then drilled, with partners both stood in hidari zenkutsu dachi kamae position (one stayed in kamae position), the other, starting off by sliding in, to just touch/block our opponent’s front then back hand with our left hand and then move back out again. Next phase was to continue on from covering their back hand, step forward deeply behind their front leg, at the same time cutting across their chest with our right arm. This slight upward break of their left leg’s stance along with the cutting down and through with our right arm, meant our partner fell to our right side and allowed us to continue on our way, as if seamlessly going on our way to a ‘tea party’!

There were numerous other drills taught to us that night, but my words fall way short of trying to convey the essence of Hotton sensei’s karate. As is often said, ‘seeing is believing’, but perhaps in Rick sensei’s case it should be, ‘seeing is feeling’. He makes his karate looks simple, natural and effortless. Maybe this stems, in a small part, from his observations of his cat, Rick even stated that his cat is one of his teachers. Sensei did admit that he was fortunate to have a good body for karate, it was suited and attune to the movements of karate.

I’m already looking forward to the opportunity to train with Rick Hotton sensei next year. If you’re ever considering taking your family over to Florida, you could always leave them to enjoy the delights of Orlando whilst you drive several hours west to Rick’s dojo in Sarasota, he is an extremely gracious teacher.

Rick Hotton sensei was accompanied on the trip over from the States by his student of 27years, Spiro. In fact, it is Spiro (or Makiwara Guy as he’s better known on Facebook - named from the fact that Spiro makes Makiwara), who the larger shotokan community should thank for coaxing Rick into allowing filming of his classes. These excellent titbits of instruction, if you haven’t already spied are available on YouTube, ie...“keeping the mind and body relaxed” is another example of the ‘feeling’ exercises Sensei taught us....